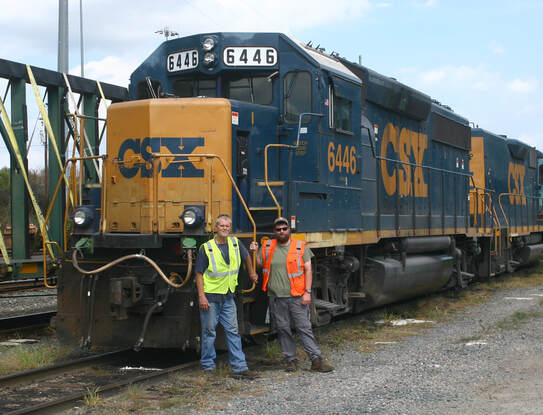 History has been a profound interest during my life and as it applies to the rail scene is no different; in fact, that pursuit is my favorite aspect of the hobby because it entails exploration and contrasting today with yesterday. It is noted that although the internet has proliferated the growth of the hobby, the predominant interest is the pursuit of the present day scene as in rail photography, video, and even the complexities of rail operations. While this majority is creating a tremendous volume of the present for future reference, those who research and document the steadily disappearing rail remnants from yesteryear are fewer in number. Fortunately, their efforts are preserving for generations to come a database of information that will be a priceless reference as the years pass. On a personal level, the latter is more on par with my primary interest.
​The seed was planted during the mid 1960s when as a young lad, I would watch from my hillside perch the switchers of the New York Central Railroad work the Charleston, WV East End sidings. Exposure to the ill-fated Penn Central Railroad expounded my interest and with multiple family ties to the B&O Railroad, it was only natural that this passion would run in the blood and continue to the present day. Hence, I have been active in various forms of railroad interest for over forty years. Because it is a multi-dimensional hobby, the interests have overlapped such as modeling and train watching or photography and historical research, for example. Of course, there has also been a decade worth of internet forum participation as well. In contrast, there has been intervals that I was not active in the hobby at all for reasons ranging from priorities in everyday life to simply taking a break for periods of time. Overall, though, the interest has been for the most part consistent and as I get older, will likely remain that way.
​The primary focus of this web page is rail history in both West Virginia and North Carolina because both of these states are "home". But it will also include contemporary topics such as general pages about locomotives, rail lines, and specific locations. A major priority in creating pages on the site is to research historical topics that have received scant coverage either in printed form or digital media. Where possible, this will be done in a before and after format. Topics from bordering states will also find their way on to this page as there areas and subjects located in these regions of interest as well. And, finally, topics of a non-railroad nature will be added such as general history and the outdoors of a scenic or natural perspective.
This web page will be a works in progress that I hope to continually add subject material to extending into retirement years. Factors such as health and resources will be the ultimate determiner as to how long this will be possible.

I hope you find the site both enjoyable and informative. Welcome!


Dan Robie 2010
WVNC Rails is a non-profit and advertisement free site created first published December 2010. All topics, images, and text contained herein by Dan Robie unless otherwise credited. The reader has permission to link this site or any of its features to other railroad related pages; also, the use of any images, text and/or descriptions is permissible as long as either Dan Robie or WVNC Rails is credited as the source. Please be advised that this granting of permission applies to my text and images only and cannot be extended to any other credited contributors on this site without their consent. (2010-2023)