﻿﻿﻿One aspect I seldom hear railfans discuss is that of watching local trains or yard jobs switch local industries. Granted, it does not hold the same luster as watching priority trains race down the mainline but there is a more indicative answer for this---there simply is not as much of it today as in years gone by. Lineside customers have declined due to the loss of industry in this country and a vast majority of rail customers need not be located by the railroad due to containerized shipments. The intermodal boom of the past couple of decades has become the face of modern railroading and although the driving force in the renaissance of the industry, it has drastically supplanted what was once a staple of operations----the local freight. Added to this is the clustering of businesses in industrial parks that are generic at best and lack the charisma of that old warehouse receiving a boxcar alongside the mainline or branch.

The Class I railroads also, to be honest, attempted to shed much of this type of operation deeming the servicing of the single small customer an expensive nuisance and opted instead to serve bulk industries with high volumes. Large tracts of Class I railroad all across the United States was sold to short line operators who could still provide "personal" service for the "mom and pop" customer. Ironically, the large railroads have second guessed these actions in hindsight and are actively soliciting the on line customer once again. What comes around goes around, so to speak.

Even the trackage that served rail customers in the past was interesting itself with the number of switches, the configurations, and the nooks and crannies of a spur running between buildings. The conditions of these spurs varied from good to awful and countless numbers of them were quite decrepit to the point of being dangerous to operate on. No question these tracks were a maintenance nightmare but they still had a charm about them. Among my fondest railroad memories was watching the Penn Central in Charleston, WV during the early 1970s. Charleston was a busy rail center in that era with a considerable amount of manifest traffic. Virtually every business alongside the railroad was a customer and the diversity of traffic was interesting. Watching the locals switch those businesses is a memory that has remained with me. But let us now fast forward to a taste of some "old time" switching today.﻿﻿ 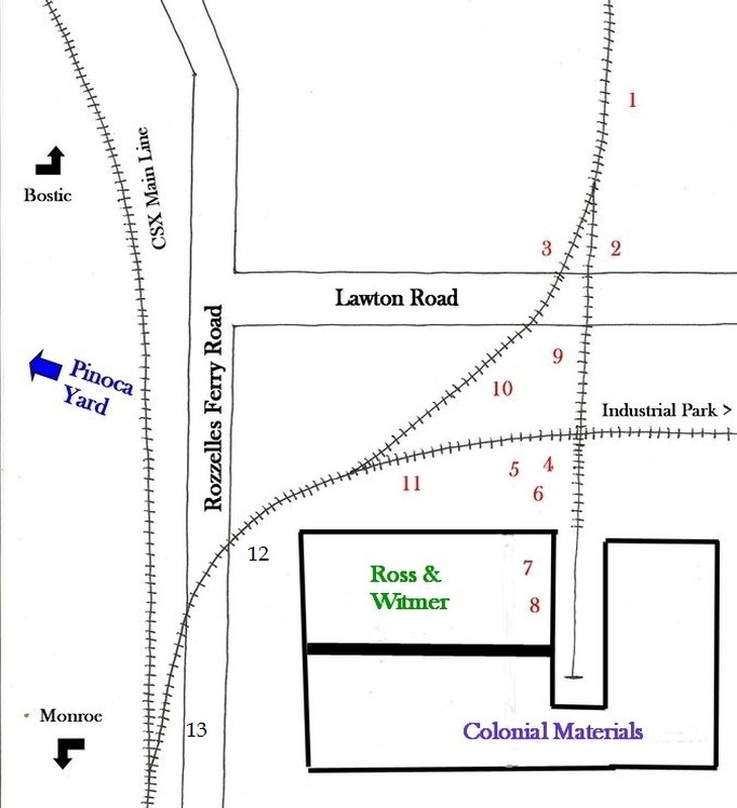 Above is a freelanced map of the featured switching location in Charlotte. The area is opposite of CSX Pinoca Yard adjacent to Rozzelles Ferry Road and Lawton Road. The customer receiving the switching move is Colonial Materials, a home improvement distributor, and on this day an empty centerbeam flatcar is being picked up. By sheer coincidence, I discovered that these photos were taken two years ago to the day of the creation of this web article. The red numbers on the map correspond with approximate photo sequence locations. All photos Dan Robie 2010.

​The track extending behind the locomotive set is out of service within a short distance. It once continued onward to serve customers that are now no longer in existence.
Since the slug has no prime mover (power plant), its primary purpose is to provide additional tractive effort at low speeds. These mother/slug sets are versatile and can be found in mainline service as well as switching. This view reveals another business to the right which is not served by rail. Note the dip in the track before the switch points. 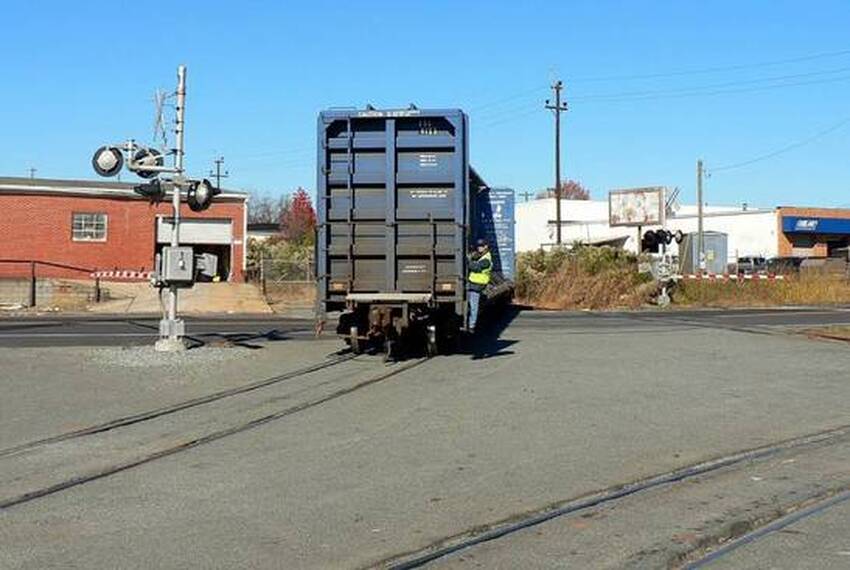 ​(11) With the conductor now riding the car, the train backs toward the Rozzelles Ferry Road grade crossing with the switching move complete. Before crossing Rozzelles Ferry Road, the conductor will have to climb down and throw the switch to realign the through route to the industrial park as opposed to the track it is on in the photo. Then it is permission to enter the main line and head to Pinoca Yard.
Date of switch move: November 17, 2010