On September 15, 2012, I had the fortunate opportunity to visit the Cabarrus County NC airport upon hearing that a B-17 would be there for the weekend. It was here to fly excursions to raise funds for preservation of this legendary bomber from both a maintenance and historical perspective.  ​ 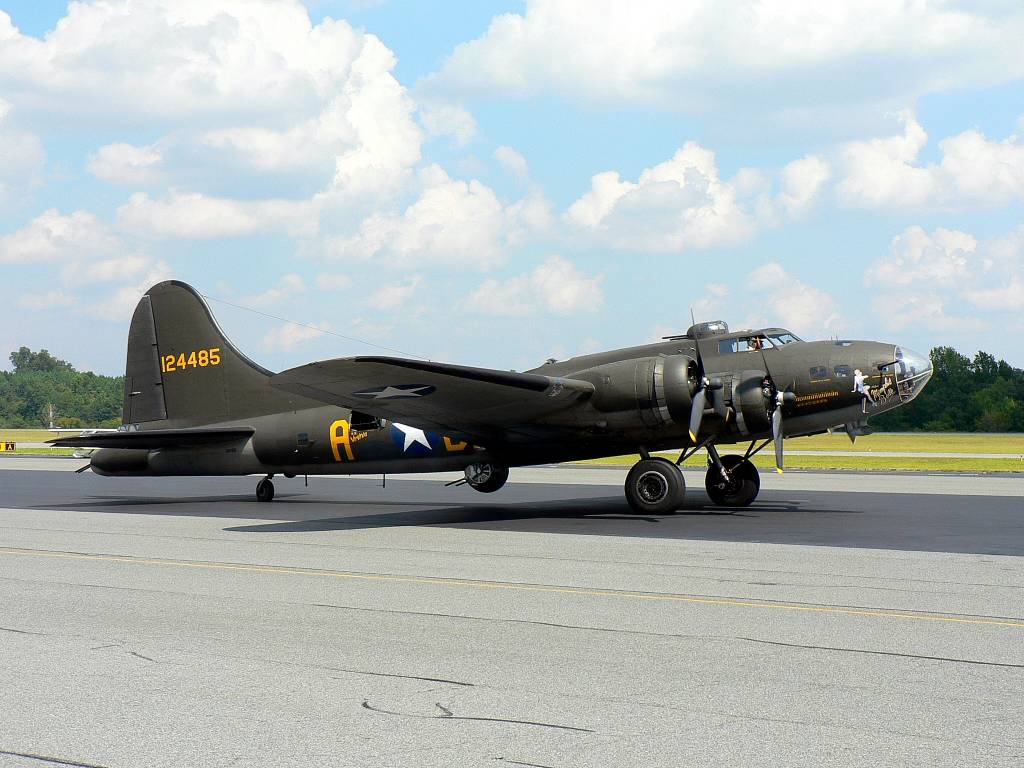 I’m not positive if this plane is the actual Memphis Belle. It is true that the original has been undergoing restoration but whether it has reached a state of flight capability yet I am uncertain. I should have asked while there.  But no matter. Regardless if this is the real Belle or not the B-17 certainly is. All I could think about while watching this symbol of World War II was Dad and all of the men and women of the Greatest Generation who fought and sacrificed for a vastly different America than we know today. Most poignant was watching World War II veterans board and disembark from this aircraft with most requiring assistance due to their ages and physical condition.
(Note: I learned that this is not the actual Memphis Belle but the aircraft used in the 1990 film of the same name instead. This is inserted as to not disturb the integrity of the original text in 2012)
​I spoke with a man who had brought his father out this day to fly in the plane and time travel back to the era of his youth. I can only imagine what that gentleman's thoughts were while airborne. I told the man that he was blessed that he still had his father to treat him to such an occasion. Most of us no longer have the honor and privilege of treating our fathers to such an event for their generation is passing rapidly.
"The Lord is the everlasting God, the creator of the end of the earth. He does not faint or grow weary, His understanding is unsearchable. He gives power to the faint, and to him who has not might He increases strength. Even youths shall faint and be weary, and young men shall fall exhausted; but they who wait for the Lord shall renew their strength, they shall mount up with wings like eagles, they shall run and not be weary, they shall walk and not faint"--Isaiah 40:28-31

The Memphis Belle is a legendary aircraft in the annals of World War II. Its crew was the first to fly the required twenty-five missions to complete a tour of duty and live to tell about them which was no small feat. Many brave crews and B-17s were lost in the skies of Europe and the Eighth Air Force of which they were attached was statistically the most dangerous theater of operation during the war. The heavy losses were due mostly in part to insufficient fighter escort protection for the daylight bombing of targets deep inside Nazi occupied Europe. Once the P-47 Thunderbolt and more notably, the iconic P-51 Mustang, entered service as long range escort fighters the losses decreased and the fate of Germany was sealed.
Despite heavy losses, the B-17 Flying Fortress earned a reputation as a rugged aircraft. Many sustained heavy damage yet managed to return its crews to air bases in England after bombing runs. There would also be little dispute that the B-17 was among the more gracefully designed aircraft to serve in World War II. In addition, there were several variants of the model but all were heavily armed with .50 caliber machine guns and they appeared in an array of paint schemes throughout the war. The B-17 was also used in the Pacific Theater but it was the stalwart American bomber of the European conflict and therefore where it is most associated.
​World War II is among most documented events in history with regards to books, video, and the internet. Plenty of specific information about the B17 and other aircraft is easily accessible. Two movies I highly recommend featuring the B-17 are "Twelve O' Clock High" (1949) and "Memphis Belle" (1990).