​There was a time when ice and fuel were common commodities often sold together from the same operator and before the era of refrigeration, were often a lucrative enterprise. Fuels such as coal or heating oils were sold from the same business providing a means of revenue year round. Businesses such as this were community gathering points just as post offices, freight depots, and general stores had been in the past. One might see his neighbor or pastor here at any given time and it was reflective of a time when business and community affairs coexisted within the same sphere.
The ice and coal business thrived in the early 20th century as this was an age when coal was used as a primary heating and industrial fuel. It was also an era before refrigeration became common and affordable both in commercial and residential applications. The ice house was a staple not only in Salisbury but in countless communities across the country to provide this service.

World War II is a demarcation point for its historical implications but its impact upon technological change was just as phenomenal. The ice and coal house business began a steady decline in its aftermath due to the shift to oil, gas, and electricity for heating and the rapid development of mechanical refrigeration both in the home and business. The postwar era also saw the implementation of mechanized refrigerated railcars on a large scale which ultimately eliminated the large block ice operations used in railcars to keep perishables fresh. The 1960s witnessed the last vestiges of these businesses in earnest. 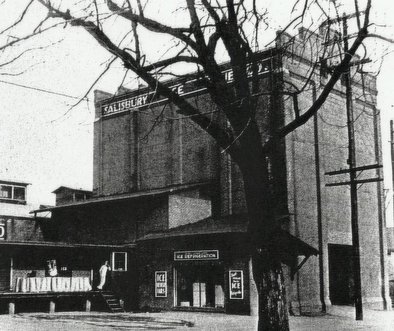 Taken from across East Horah Street, this 1930s photo captures the plant in its heyday.  Rowan County Public Library
​
The Salisbury Ice and Fuel Company, a subsidiary of the Catawba Ice and Fuel Company(later Atlantic Ice and Fuel), was incorporated in 1912 with $100,000 of capital by J.W Hines, then president of the Rocky Mount & Wilmington RR. Other officers appointed in the Salisbury Ice and Fuel Company were R.H Hicks as vice president and M.R. Braswell as the treasurer and general manager. Construction of the brick building that became the Salisbury plant was completed in 1912. By 1916, demand enabled the Salisbury plant to increase in capacity to 100 tons.
Coal delivery to the Salisbury plant was by a siding that connected directly to the Southern Railway mainline. This siding, located opposite East Horah Street from the plant, diverged from the main south of the plant and was elevated resembling a trestle to allow the dumping of coal. Hopper cars loaded with the fossil fuel would be spotted on the ramp and the chutes opened resulting in the coal spilling beneath the structure. The black diamonds were of different sizes for use in either residential or industrial applications. Although coal was the primary fuel, the plant also sold wood and coke for heating as well. A general siding also served the facility. This spur connected to the mainline and ran along the main building to serve the main building and auxiliary structures on the north side of the plant. Traces of this track are still visible today. 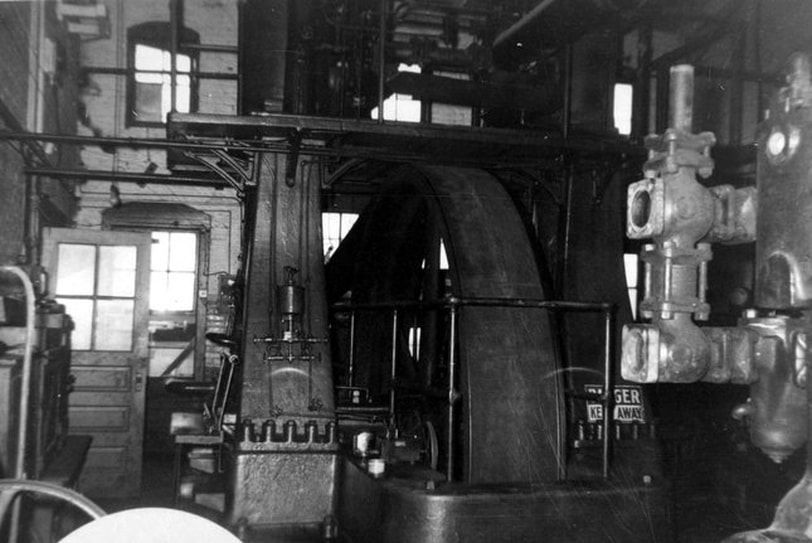 Interior view showing the massive ice making machinery in place. Image circa 1930. Courtesy Rowan County Public Library.
Any type of industrial plant that operates for many years will inevitably experience some sort of accident. So it was with the Salisbury Ice and Fuel plant when in 1928, a breakdown cause a massive ammonia leak that coupled with the wind direction, spread southeast across Salisbury. This incident caused some panic and incited concern from those not familiar with the commercial manufacturing of ice as to why this ingredient was used and if it was actually within the ice. It was not, of course, and all returned to normal thereafter.

Doggone Day at the Plant 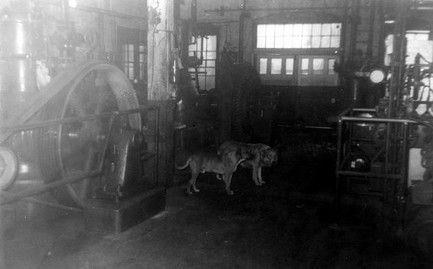 Anyone with an affinity for dogs will enjoy this image. There was once a time that man's best friend was a common sight at businesses and especially in rural areas. Although most associated with junkyards, our canine friends were common sights at plants, mills, and gas stations and as much a part of the scene as the workers.
These two old guys pictured here, long since perished and forgotten, are still kept alive through the magic of the camera. Circa 1920s. Courtesy Rowan County Public Library.
By 1932, the booming ice business had enabled the Salisbury plant to expand in storage capacity to 2500 tons, a substantial increase since the plant opened in 1912. The end of Prohibition in 1933 opened the door to yet more business when the site was selected as a distributor for Lion Beer. East Horah Street was teeming with activity----twenty one delivery trucks were kept busy and traffic coming to the plant was backed up for blocks during hot summertime pickups. Salisbury Ice and Fuel was at its zenith and would remain at this level until the immediate aftermath of World War II. 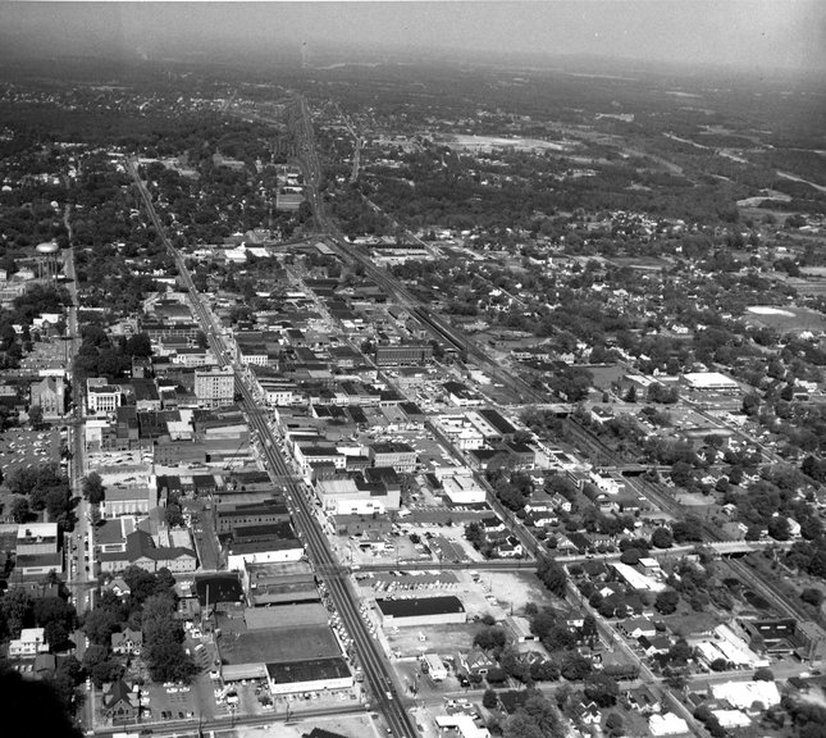 Downtown Salisbury as it was during the early 1960s in an aerial view looking north. Chock full of detail, the Southern Railway mainline through town and the Spencer Yard in the distance bisect the scene. The Salisbury Ice and Fuel plant is in the extreme right bottom corner. Courtesy Rowan County Public Library.

Business remained strong in the immediate post war era that lasted into the early 1950s. But the portents of change were in motion. Technological advances fed an American consumer yearning to progress and return to a life of normalcy after years of global conflict. The public was hungry for new innovations and this included in home refrigeration that was affordable. Commercial industry also was in transition and the revolutionary means of refrigeration would fulfill requirements at the industrial level. With each passing year, Salisbury Ice and Fuel, as did the ice and fuel business elsewhere, witnessed the decline of business and revenue until it could no longer operate profitably. By the end of the 1960s, this type of business was at extinction.

Once the plant closed, it sat dormant until the decision was made in 1974 to demolish it. Razing commenced but only the west side of the structure including the office was torn down leaving the brick section adjacent to the railroad as the only remnant. The failure to completely demolish the structure led to repeated controversy during the 1980s and 1990s in regards to zoning laws, the fear of attracting undesired elements, and the outcry that it was a public eyesore. Today, the remaining building has visible signs of decay but is now listed as part of the Salisbury Historic District. The hope is for eventual occupancy preferably as a museum of some sort.

Interior views of the walls and ceiling inside the remaining ice block house. The blocks were once covered with cork insulation to keep the interior cold. New ceiling and roof were recently reconstructed. Dan Robie 2015
The remains of the Salisbury Ice and Fuel plant stand in a quieter vigil today since the closure of the grade crossing at Horah Street. Since the road is now a dead end devoid of traffic, the only remaining similarity to yesteryear is the passing of trains by the old building. 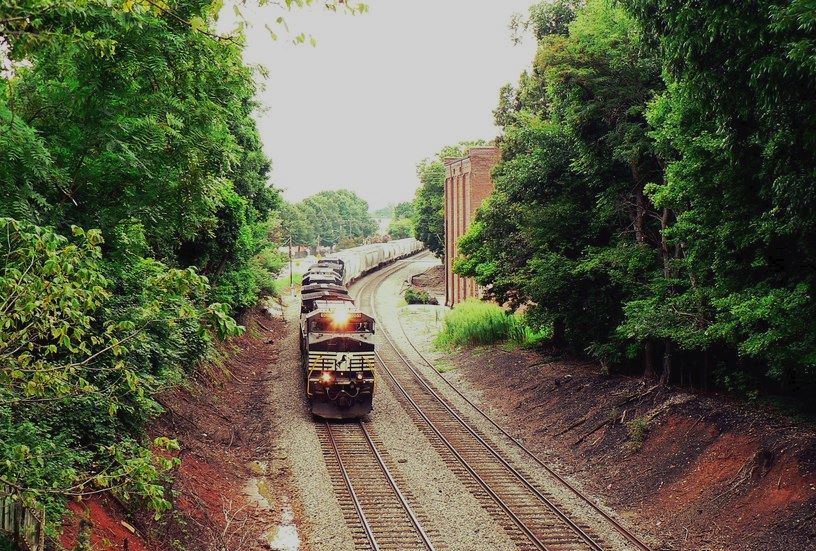 A view looking south from the West Bank Street bridge with the old plant at right. This is how the building appears for train crews as it has for more than a century as attested by the northbound NS 338 in this scene. Dan Robie 2014

Constructed in 1914, the ice plant at Spencer was primarily for the icing of railroad cars on the Southern Railway. The town location was strategic for the railroad operationally as the midway point along the Washington-Atlanta mainline and an icing platform located here only made sense. In an era before mechanically refrigerated rail cars, block ice was critical for the transport of perishables to keep them fresh until arriving at the determined destination. The Spencer plant of Salisbury Ice and Fuel filled this necessary niche. 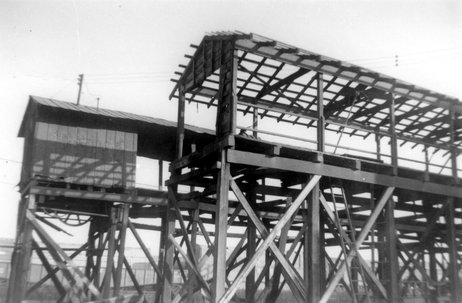 A 1950s view of the icing platform at Spencer. The structure was built at this height in order for workers to open the hatches on top of railcars to add ice. Courtesy Rowan County Public Library.
The building at the Spencer plant had a storage capacity of 15000 tons and its five inch thick interior walls were insulated with sawdust and sheets of cork. Ice was manufactured in 300 pound blocks and was moved into the storage room by crane. The actual insertion of ice into the cars was done by the workers using a long rod with both a hook and point. Once the ice was placed into the bunkers atop the railcars, it was also salted to make it "colder".
Although the Spencer location focused primarily on the railroad, it also catered to local business in addition to harboring a coal yard for heating fuel. The chronology differed from that of Salisbury in that this operation peaked very early in its history and the decline accelerated after World War II. As an example, 5000 railway cars were iced in 1919 but by 1950 that number declined to 1000. So rapid was the deployment of mechanically refrigerated railcars during the 1950s that by 1960, the Spencer plant had become obsolete. 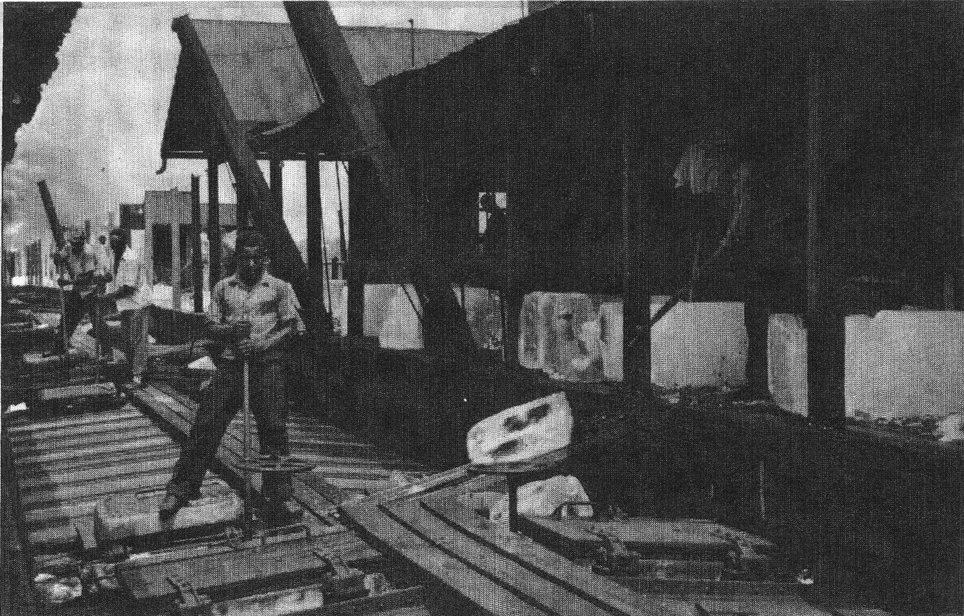 The essence of the operation. Workers atop railcars open the bunker hatches preparing to load the ice inside. Image circa 1930s. Courtesy of Rowan County Public Library.
​Throughout its history, the Salisbury Ice and Fuel plant at Spencer was victimized by three fires. The first occurred in 1930 when a fire resulted in an explosion that destroyed a fifty-five foot section of wall at the storage building. Six employees were seriously injured in this disaster in addition to many other being treated for minor injuries.​
A second fire in 1954 resulting in $50,000 worth of damage occurred when a spark from a heating torch ignited the cork insulation within the building. Work was in progress on the piping when this fire started. Parent company Atlantic Ice and Fuel announced plans to rebuild the plant along with a new cold storage warehouse. This had to be somewhat of a surprise that this much capital was being reinvested into a business that was experiencing rapid decline. The third fire was anticlimactic. This one occurred in 1972 long after the plant had closed and the decision was made to allow most of it to burn. Southern Railway had purchased the property and slated the old plant for demolition anyhow. Bulldozers leveled what was left of the Spencer plant in 1973.
There is no visible trace of the Spencer plant today. The old rail siding still runs adjacent to the mainline in East Spencer but the area once occupied by the plant is covered by woods. 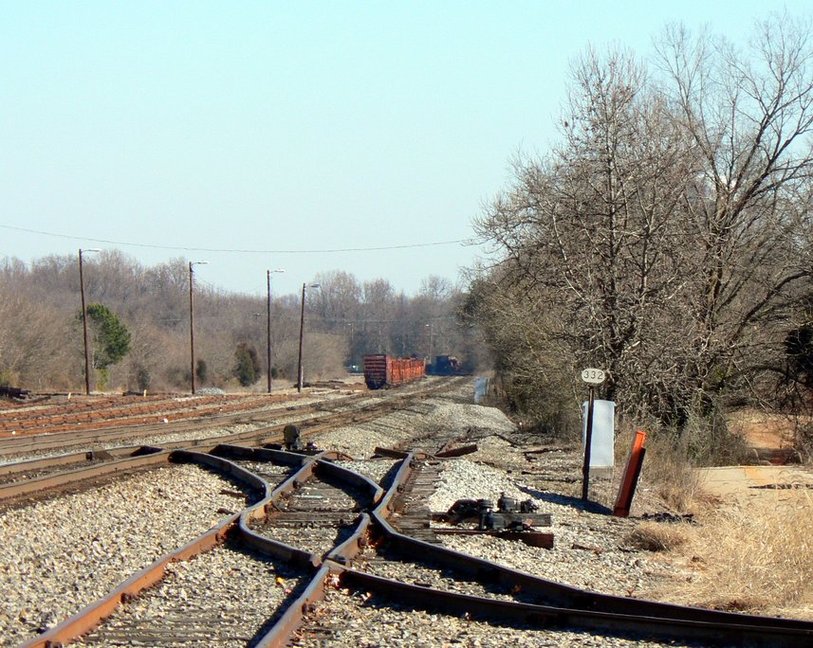 A zoomed view looking north adjacent to the old railroad yard at East Spencer. The wooded area at right is where the Salisbury Ice and Fuel plant was located; interestingly, the rail siding adjacent to the woods is still referred to as the "peach" or "ice house" track. Dan Robie 2015