​"And wherever the river goes, every living creature that swarms will live, and there will be very many fish. For this water goes there, that the waters of the sea may become fresh; so everything will live where the river goes". Ezekiel 47:9 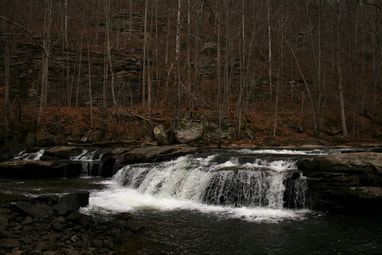 It is often recounted that the Earth was shaped by the hand of God. The mountains, valleys, plateaus, and even the mighty oceans themselves. If these were the work of His hand, than surely His fingers notched the streams and rivers that flow like arteries upon the landscape. Each and every waterway is an image of majesty unique of itself whether it be the smallest of brooks or the largest of rivers. They share similar characteristics depending on the topography they traverse but with that said, each one is stamped with its own identity. Whether it be rushing stream with rapids and waterfalls or a large slow flowing body embodying tranquility, they are a mesmerizing marvel of God's Kingdom. Throughout the world all streams share the common denominator of their waters ultimately mingling together in the vast seas. By the incredible process of evaporation and condensation, they replenish their existence in an ongoing cycle as they have since the Beginning.
"All the rivers flow into the sea, Yet the sea is not full. To the place where the rivers flow, There they flow again". Ecclesiastes 1:7
To relax upon a riverbank is an opportunity to free the mind and soul while permitting them to reflect or renew. For in this serene venue the mind will reminisce to the past to a time that is no longer at arms reach but survives deep in memory. It simultaneously gazes into the future as the passing waters flow with eternal hope that what lay ahead is the fulfillment of good. The psychology of nature--in and of itself--if not but for a moment allows us to pause and place all into context. There is a magnetism to flowing streams which attract many to seek their soothing power.
"Let the rivers clap their hands, Let the mountains sing together for joy."  Psalms 98:8
For as long as mankind has inhabited the earth, he has settled in the basins of streams great and small. They were--and are--the sustenance of life. Of its waters he cast his cup; from its waters he harvested its fish; across its waters he rowed to explore the next hill in his eye and beyond; alongside its waters he hunted game drawn to its shores not unlike that of himself. The flowing waters of the earth concurrently represented peace and fury. Man has stamped them with his dependent needs and tainted them with his neglect. He has tamed them for commerce, safety, and recreation while allowing others to flow free as God created them. They are indeed, streams of life--a universal kinship of man, fauna, and flora co-existing in living harmony.
"Sit beside a mountain stream... see her waters rise... listen to the pretty sound of music as she flies". Mother Nature's Son-Lennon/McCartney
Below is an assimilation of photos taken throughout the years of creeks and rivers during my outings primarily for railroad history research for compilation into web site pieces. Others predate that time from earlier periods of my life. There is no pattern for their placement; random is their insertion into this page as they are recovered from photo archives which will also follow suit with future inclusions onto the page. In some instances there will be multiple images of the same stream. As the reader may surmise, there are streams that hold special meaning in my life. Whether it be familiarity, nostalgia, or direct association such as fishing the respective waters, there is a life-long link to those specific bodies of water. Also included are those with no sentimental attachment but are admired for their beauty nonetheless. Of note, a similar dedicated page about the Kanawha River in West Virginia---Kanawha River Days-- appears on the site.
​Initial publication date October 2020. All photos by Dan Robie unless otherwise credited 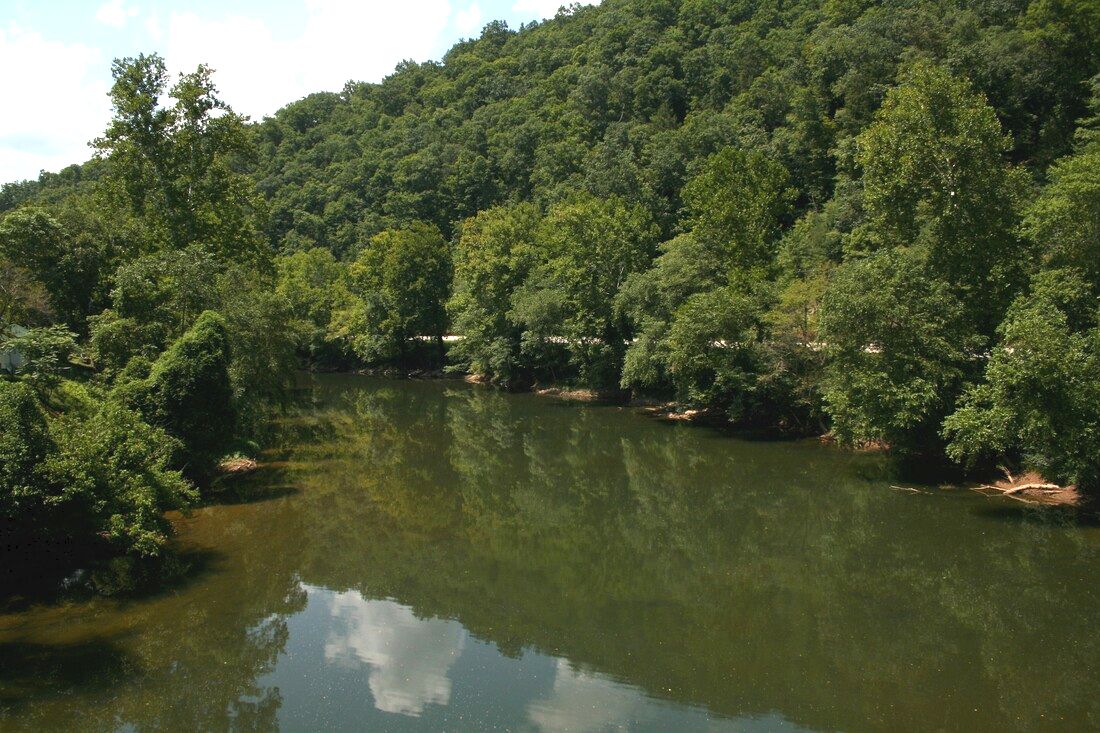 This calm pool of the Elk River is inviting for both kayak and fishing pole. A view looking downstream from the bridge at Ivydale, WV.
Falls Mills on the Little Kanawha River at the small community by the same name in Lewis County, WV. At left is an above view of the falls and at right, the pool below formed in 1976 by the creation of Burnsville Lake. 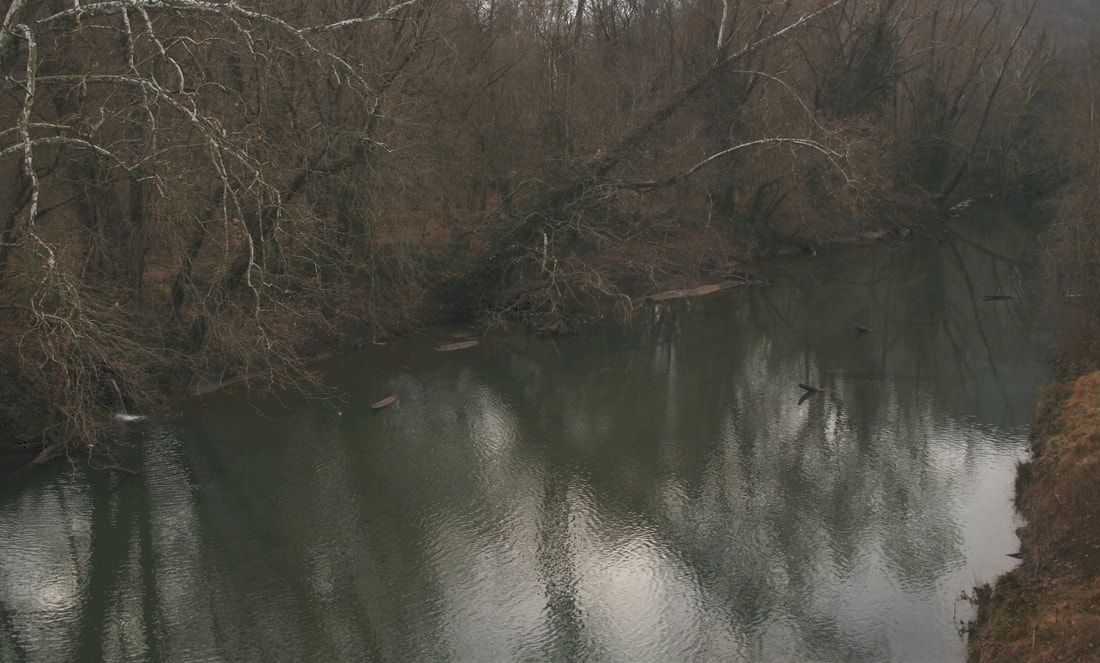 Thoughts of Paint Creek conjure an image of a rapidly flowing stream paralleling the West Virginia Turnpike. But here it is in a more placid state near its confluence with the Kanawha River at Hansford, WV.
Two views of the Ohio River at Ripley, OH. This location was a prominent historical crossing between North and South for the "Underground Railroad" aiding the escape of fleeing slaves. 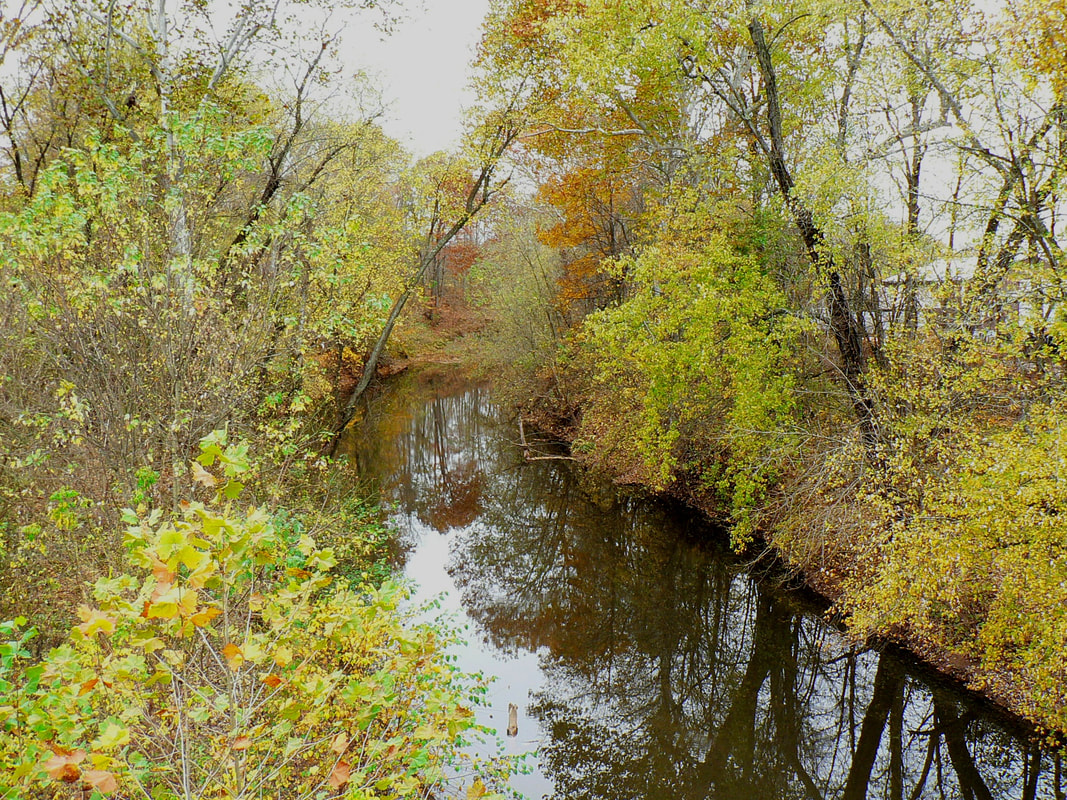 The land of my father and his father. Rarely seen clarity of Mill Creek passing through the fall foliage and native soil of my family heritage at Angerona, WV.
Winter views of the Elk River at Yankee Dam, WV. This section of the river in Clay County is prime water for musky, walleye, and smallmouth bass fishing. 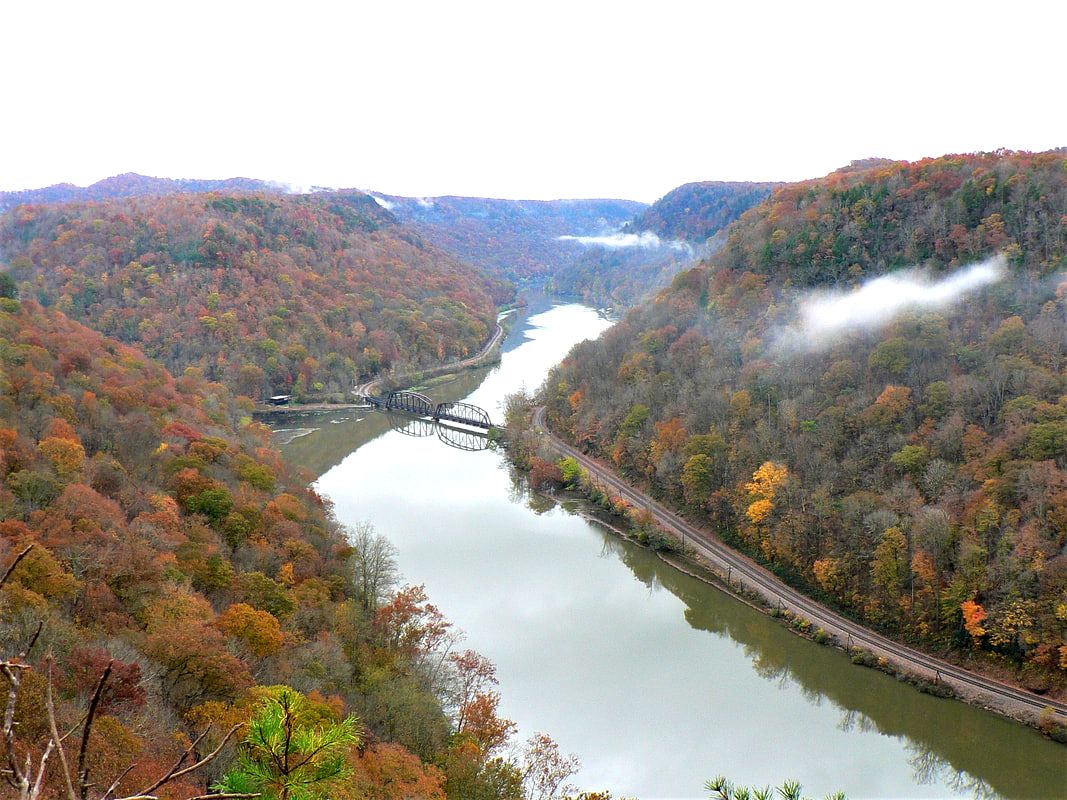 Arguably the most famous vista in West Virginia, the overlook at Hawks Nest provides a dramatic if not inspirational view of the New River. The pastel autumn palette intensifies the splendor.
Among the most famous wonders on earth, Niagara Falls is a sight to behold. On the left are the American Falls and at right, the horseshoe Canadian Falls with the tourist boat "Maid of the Mist". The Niagara River is the outlet from Lake Erie that connects to Lake Ontario. 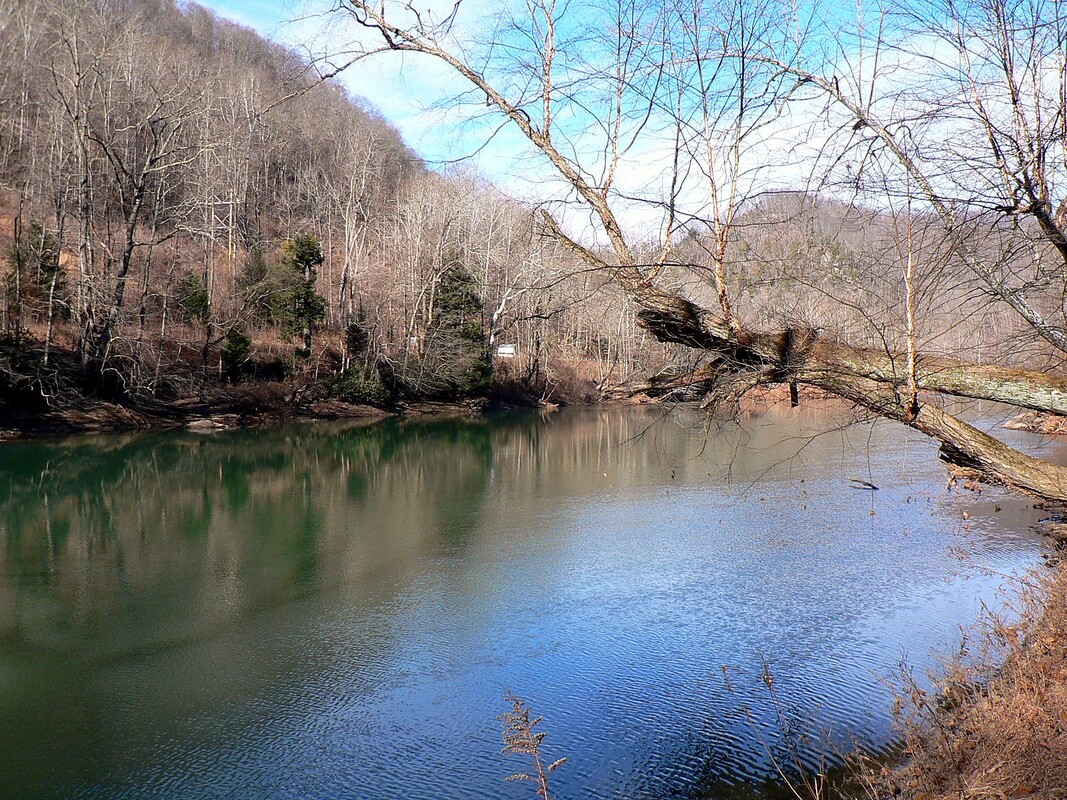 The reader will no doubt note that this stream is a favorite of mine to photograph. Winter scene of a deep pool on the Elk River at Elkhurst, WV. Summer camps populate the river in this region for those who enjoy its clear, cool waters to boat and fish.
On the Ohio River at Cincinnati. At left, riding a sternwheeler upstream in the wake of a boat pushing barges. On the right is the mouth of the Licking River on the Kentucky side. 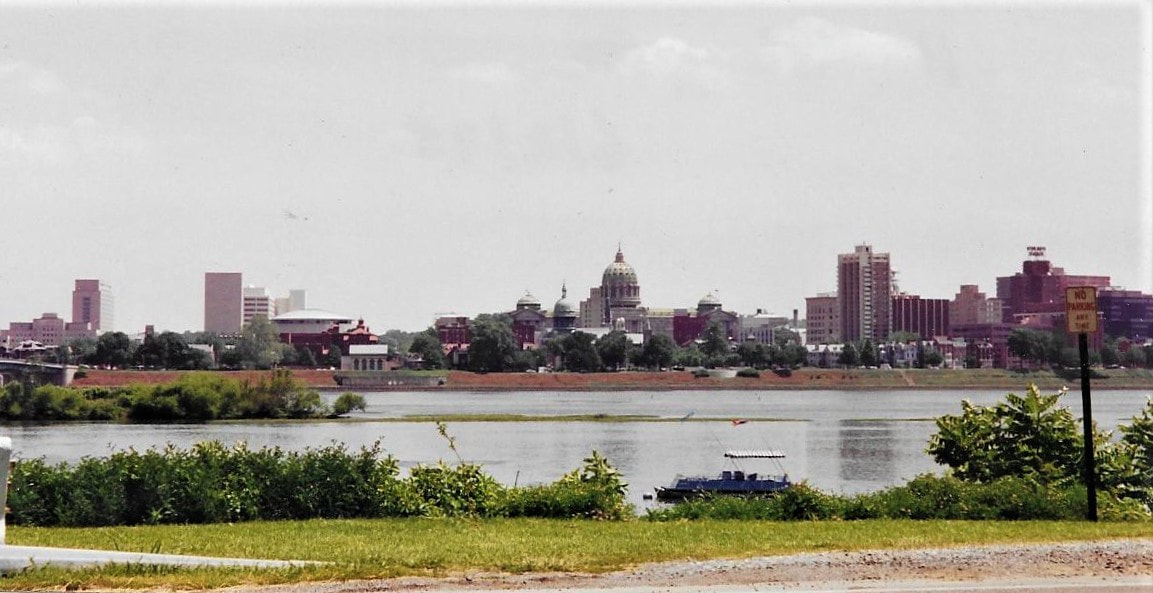 The capital of the Keystone State on a sweltering summer day. Harrisburg, PA on the banks of the Susquehanna River as it appeared in 1995.
The cold, swift waters of Paint Creek rush through the otherwise barren landscape of Fayette County in winter. Two scenes of a once polluted stream on the rebound at Mahan, WV. 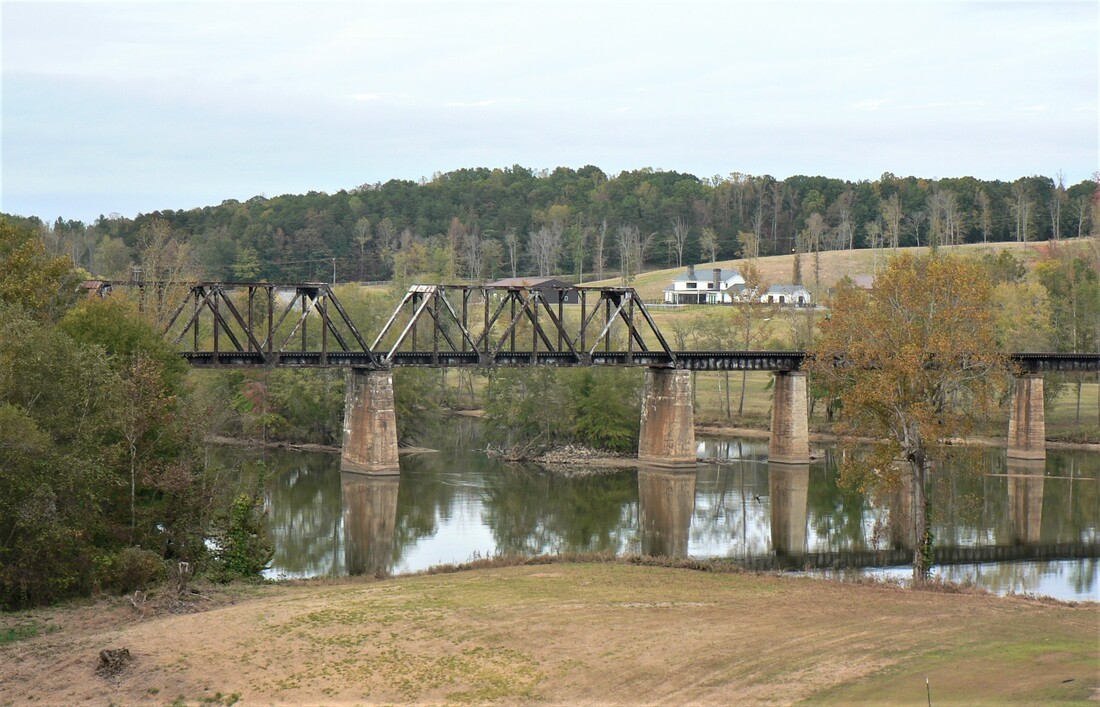 This river has been tamed by the creation of numerous lakes in North and South Carolina. A late evening view of the Catawba River in autumn at the town which shares its name in western North Carolina.
Upstream and downstream views of the Ohio River at Ashland, KY on an overcast day. Commercial activity on the river here has ebbed with the decline of a one time heavily industrialized region. 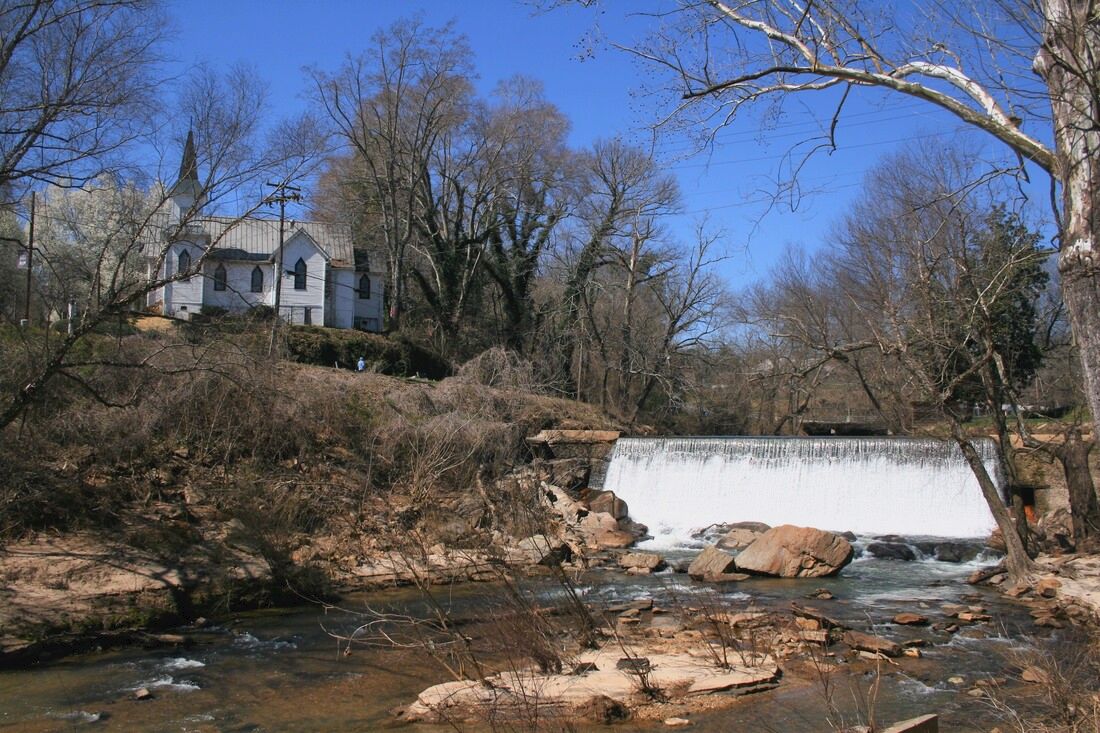 Cold water of January flows over a dam spillway on Big Elkin Creek at Elkin, NC  The old church on the hill creates a rural atmosphere within the limits of the town.
Two more winter views of the Elk River in Clay County, WV. At left is a pool in the river looking east at Dundon and on the right the stream passing through "the end of the world" region  between Duck and Ivydale. 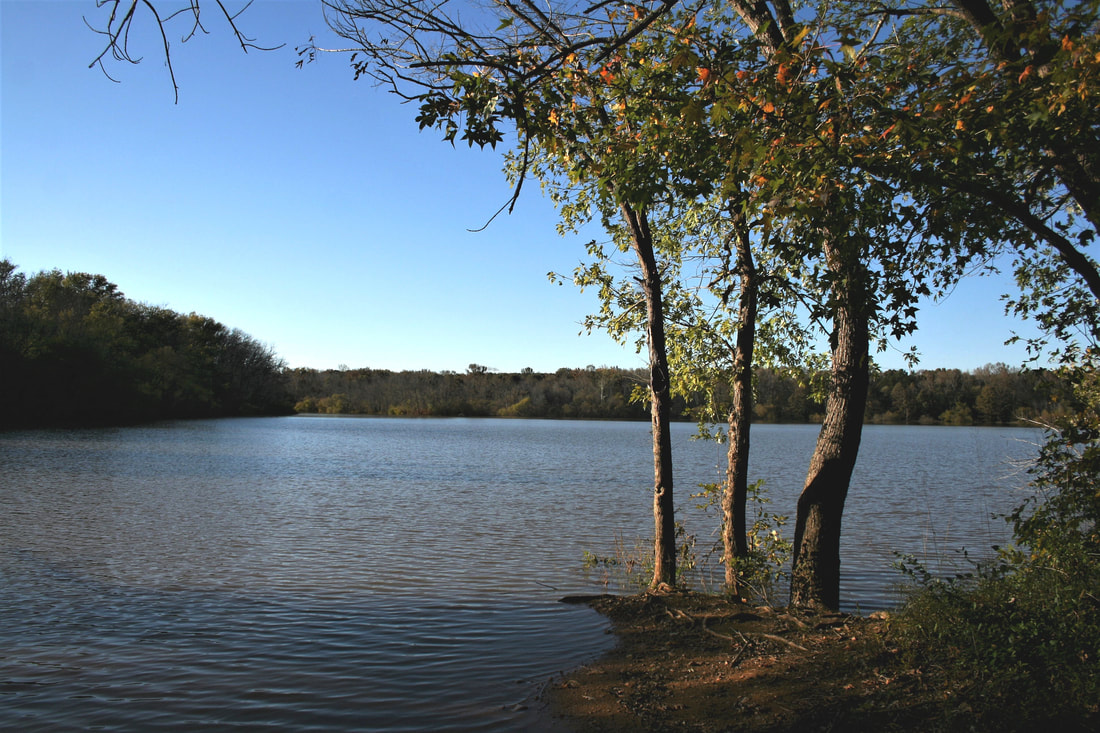 Yadkin River at Yadkin, NC on a late afternoon in November. The river increases in size here as it  becomes the headwaters of High Rock Lake.
Two more views of the Ohio River from a riverboat at Cincinnati. The first view looks upstream and on the right, the downstream view toward the city center, 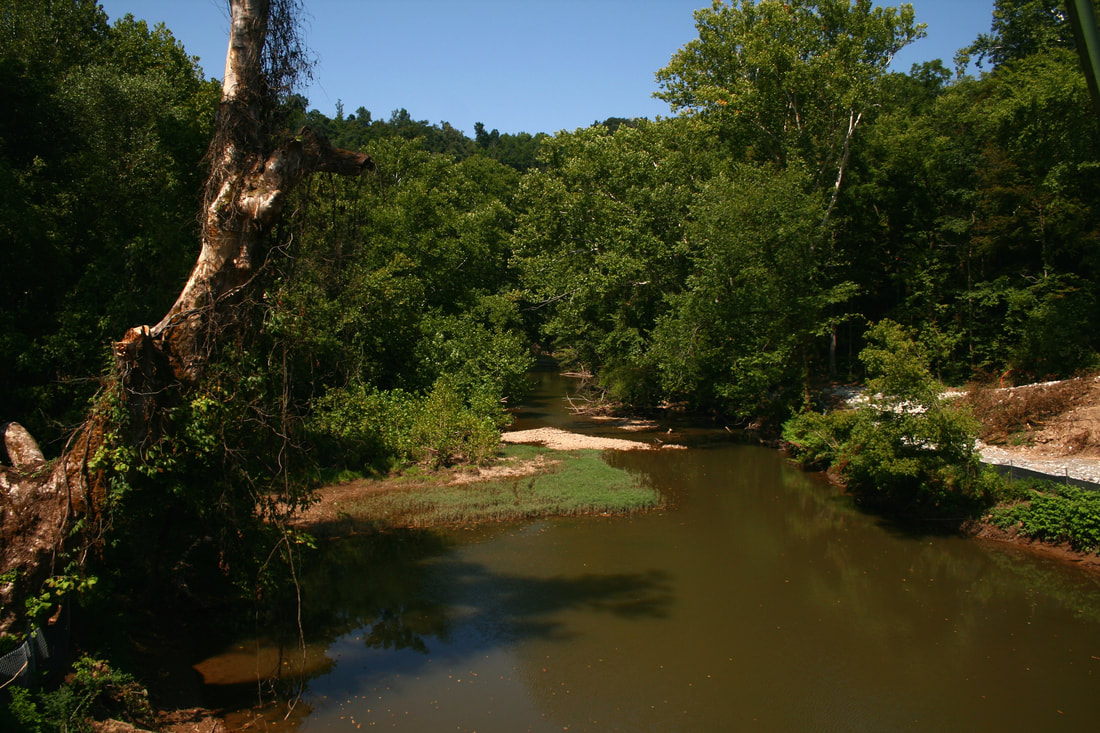 The Little Kanawha River is a small, meandering stream in its upper reaches. This image captures it between Gilmer and Glenville, WV on an August afternoon.
On the left: A view of the New River above Hawks Nest as seen from the 1989 New River Train. At right is the old hydroelectric station at Kanawha Falls in Glen Ferris, WV. 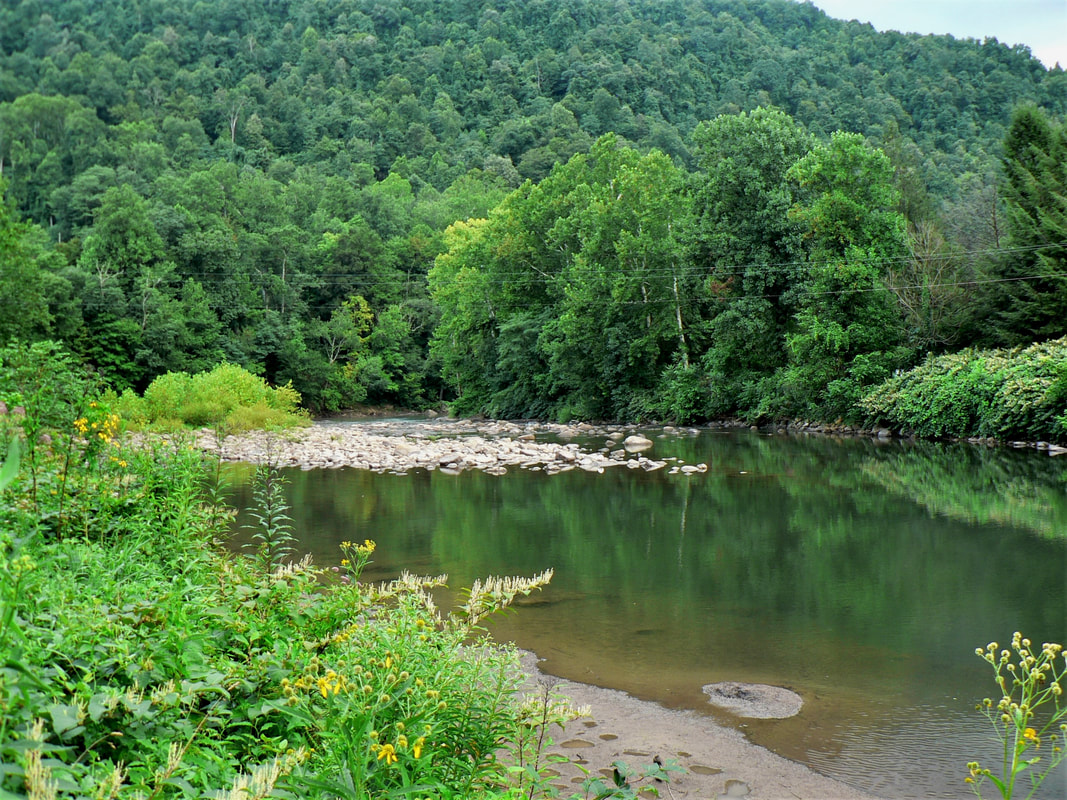 The lush green of summer surrounds the stillness of the Elk River at Webster Springs, WV. This spot beckons for a fishing pole with its clear water and the enticement of peaceful solitude. 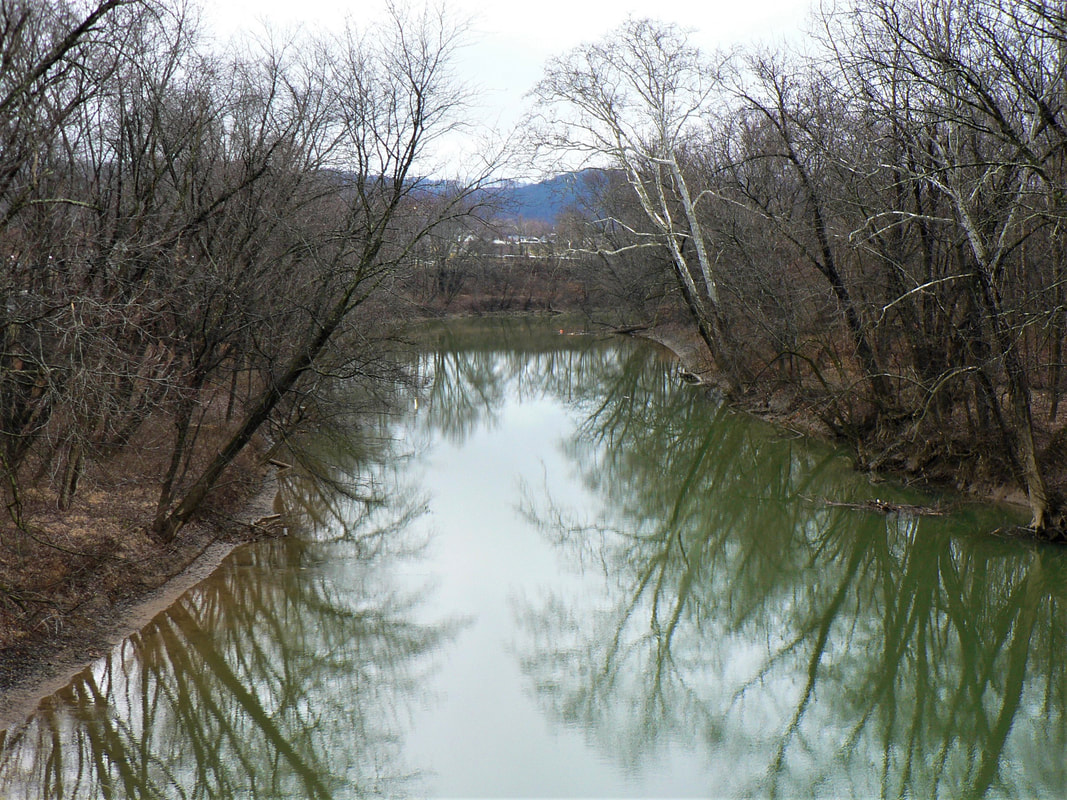 Winter view of the calm water in Twelvepole Creek at Ceredo, WV. This location is shortly upstream from its confluence with the Ohio River. 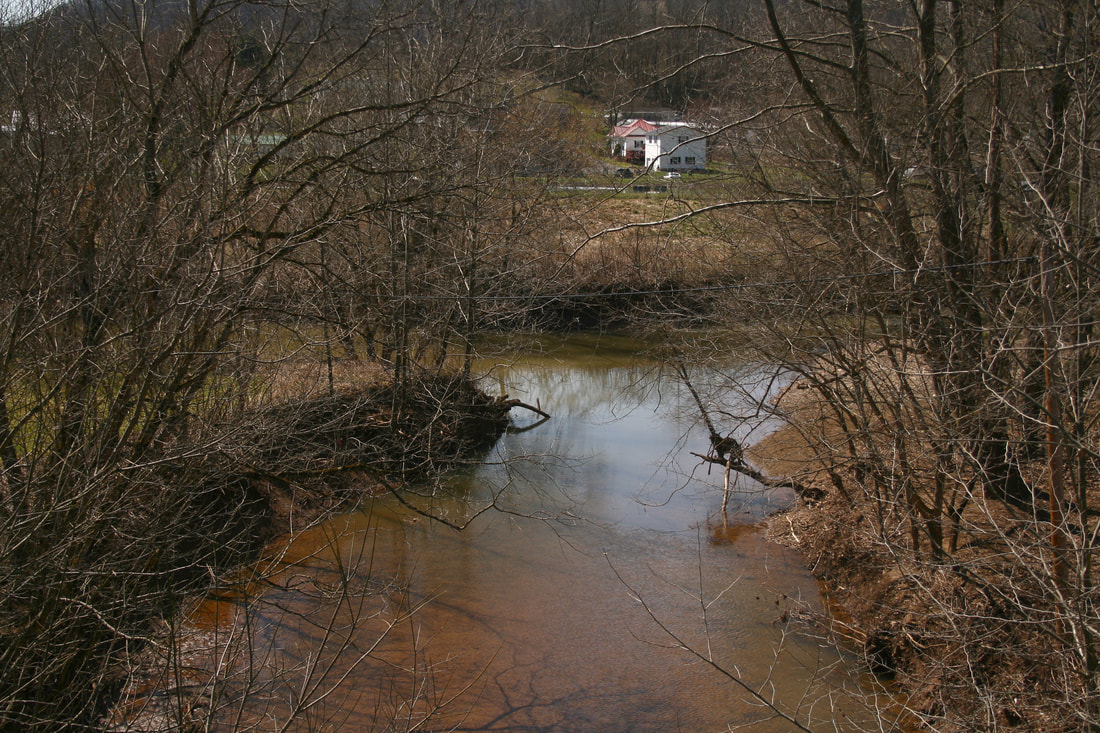 Where muskies lurk. Oil Creek meets the Little Kanawha River at Burnsville, WV.
To be continued........