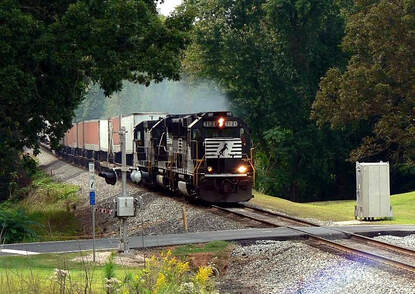 ​Emerging through a shroud of trees, the #7121 leads two other mates with NS 212 in tow at Landis, NC in September 2006. Dan Robie 2006
In the roughly twenty year period that I have watched trains along the Norfolk Southern Piedmont Division, there has been a diversity of motive power both inherit to NS, leasing companies, and foreign roads. When most think of the power here, the high hood versions of the GP38-2, GP50, and SD40-2 typically come to mind because of their uniqueness. Nowadays, the Heritage Fleet probably tops the list along with the F units used on the NS Executive trains.
The period that I spent the most time along NS was 2004-2007 and it was during this era that the road used as standard practice what could be considered as an anomaly in 21st century railroading---the use of four axle power in intermodal service. The signature locomotive of this set was the GP60 and it was common to see sets of them hustling pig trains along the eastern north-south corridor. Certainly other locomotives were also used whether EMD or GE but the GP60 was dedicated with few exceptions to this type of service. Intermodal trains were the highlight for me during this era because these GP60 sets were my favorite power consists on NS rails. Some of this no doubt was a result of a harkening back to my youth witnessing the GP30 through GP40-2 mixed sets used by the Chessie System. 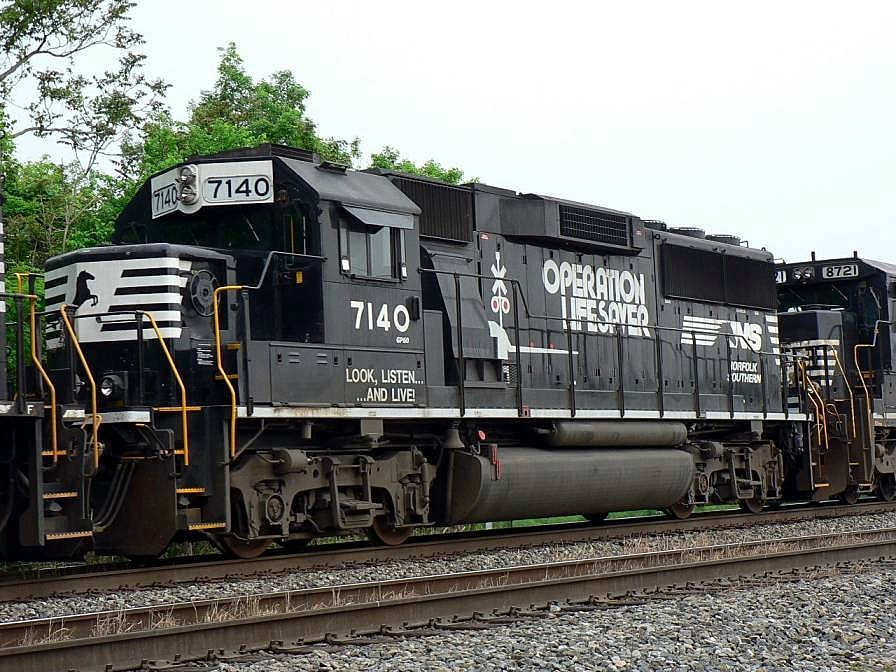 ​Perhaps the most unique NS GP60 is the Operation Lifesaver #7140. The new number boards and "horsehead" scheme further enhanced the appearance of this four axle racehorse. Dan Robie 2007

The GP60 was simultaneously a first and last of a kind. The GP60 (along with its six-axle cousin SD60) was a “first”----generally identified as a third generation model----as it incorporated new microprocessor circuits which replaced older circuitry in previous EMD models. Conversely, it was the final four axle locomotive built by an Electro Motive Division of General Motors that was in wane with General Electric superseding it as the premier locomotive builder. It was offered in either the Spartan cab design long associated with EMD or in a wide "safety" cab version such as the ones purchased by the Santa Fe. It was also built as a cabless “B” unit with the Santa Fe the only buyer of these as well.
​By the mid-1990s, the railroad industry was exclusively transitioning to six axle power with new orders deeming it more utilitarian for the future needs and by the early 21st century, this practice emerged full force. In spite of the shift to six axles, fleets of older four axle power populated the rosters that would still fulfill secondary uses. The year 2007 was when the winds of change blew in pertaining to the GP60 in intermodal service. NS began using the GE four axle B32-8s in intermodal service that were either mixed with GP60s or occasionally, in solid sets themselves. This was short lived, however, and soon the big six axle GEs took over as the predominant power with a sprinkling of six axle EMD power used as well. The GP60s are still out there serving in a hodgepodge of duties whether it be on locals, yard jobs, or secondary trains. The glory days of priority intermodal service are behind it now which in itself is a sad irony since that is the service it was primarily intended for.

End of an Era 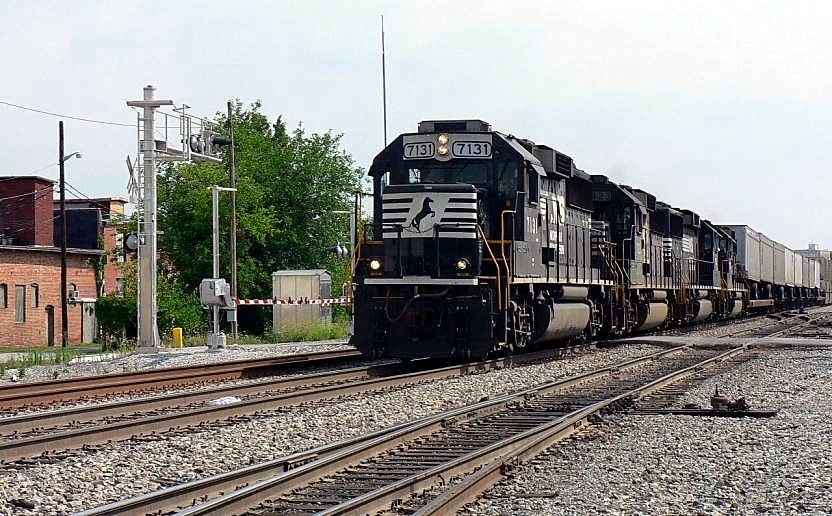 ​This was the last solid GP60 set that I photographed. By this date, the intermodal sets were usually a mix of GP60s and GE B32-8s or six axle GEs. Here, the #7131 leads three other sisters as it passes through High Point, NC with NS 213 on June 23, 2007. Dan Robie 2007
Two sepia images of the #7112 and #7129 at Barber, NC in October 2007. This time period was several months after the units were removed from intermodal service and reassigned to general freight duty. Both images Dan Robie 2007

Additional random images of the GP60 in action from the early 2000s below: 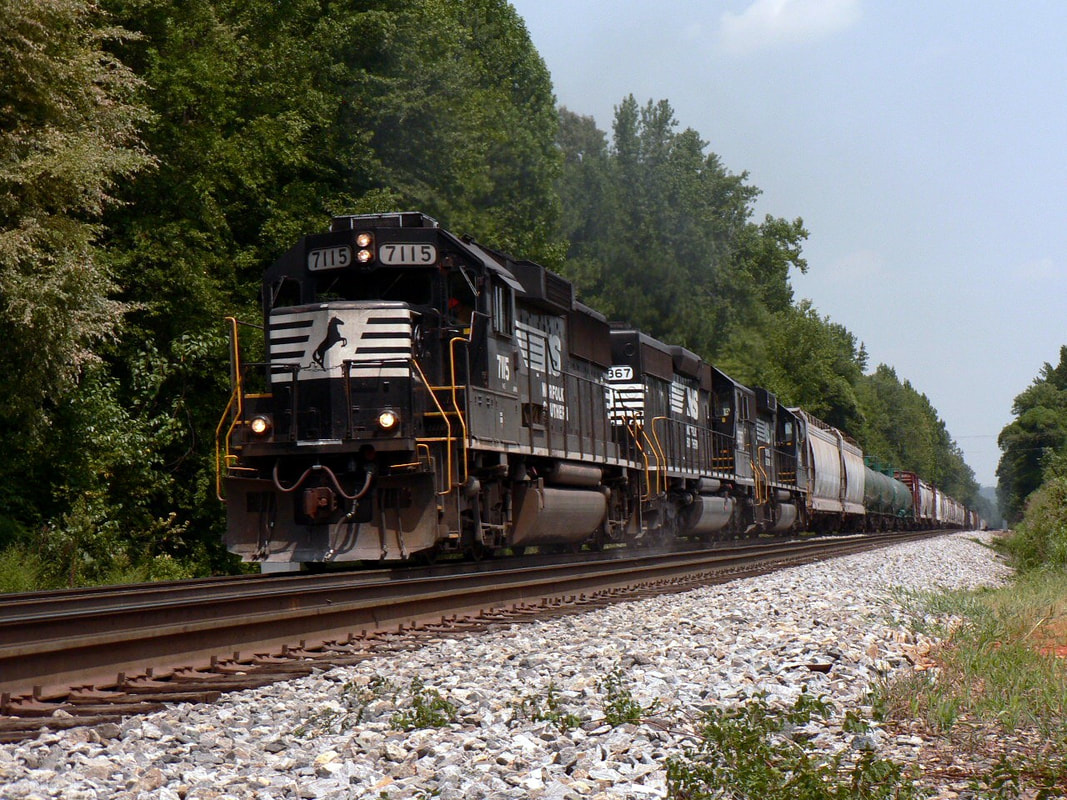 Not long after the GP60 was removed from Piedmont Division intermodal service. The #7115 leads two other units on NS P61 as it climbs the hill at Five Row (Spencer, NC) bound for points west on the "S" Line. Dan Robie 2007
​During the past several years, the presence of the GP60 has been sparse on the Charlotte District. Local power is typically represented by the GP38-2 and SD40-2 on most trains although on rare occasions, a GP60 will migrate onto the district and receive assignment on a local. It has been several years since I last photographed one but my son has had the good fortune to catch them at varying intervals. A few of his photos appear below. 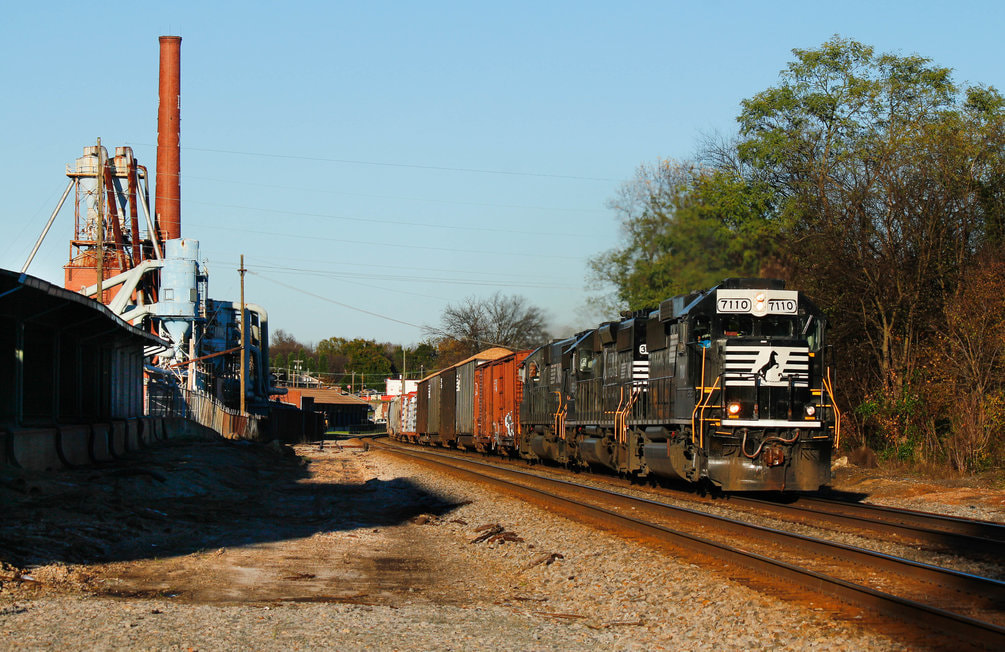 ​The stillness at the long idle Dixie Furniture plant is shattered by the #7110 led NS P94 running through Lexington, NC. This train operates as a turn between Linwood Yard and Winston-Salem---here, it is returning south. Image Matt Robie 2015
2019 Update: Since this page was originally published in 2013, the GP60s remain in service on the NS roster. However, dramatic changes have occurred with railroad operations during the past six years of which the most profound is the implementation of Precision Scheduled Railroading (PSR). Norfolk Southern has sold or retired several classes of locomotives and the fate of the GP60 remains to be seen as of this writing.