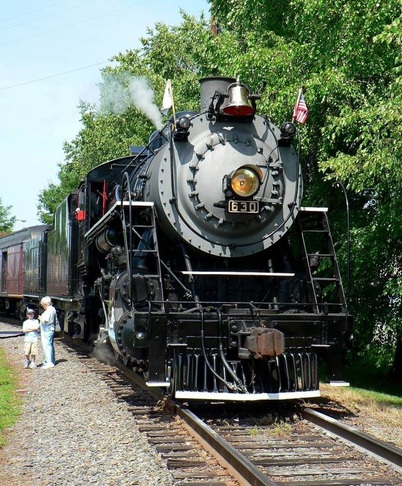 The #630 prepares to depart the North Carolina Transportation Museum (NCTM) with NS employee excursion on June 9, 2012. Her front profile is further graced by the flags. Dan Robie 2012

As part of the Norfolk Southern 30th Anniversary celebration, the company ran steam excursions for both employees and the general public. In North Carolina, the excursions were as follows:

These runs transcend interest by only the die-hard rail enthusiast because of the nostalgic fascination with the steam locomotive. People that are generally disinterested with trains will stop and take notice as one runs by.

In the North Carolina region, steam last graced mainline rails in 1994 when the N&W #611 made its retirement run over the NS Piedmont Division en route to Roanoke. It has been a long two decades in waiting to witness this phenomenon again and the excursions did not disappoint.

I took numerous photos over the period of a couple of weekends and selected my favorites of the lot to share here with any who are interested. 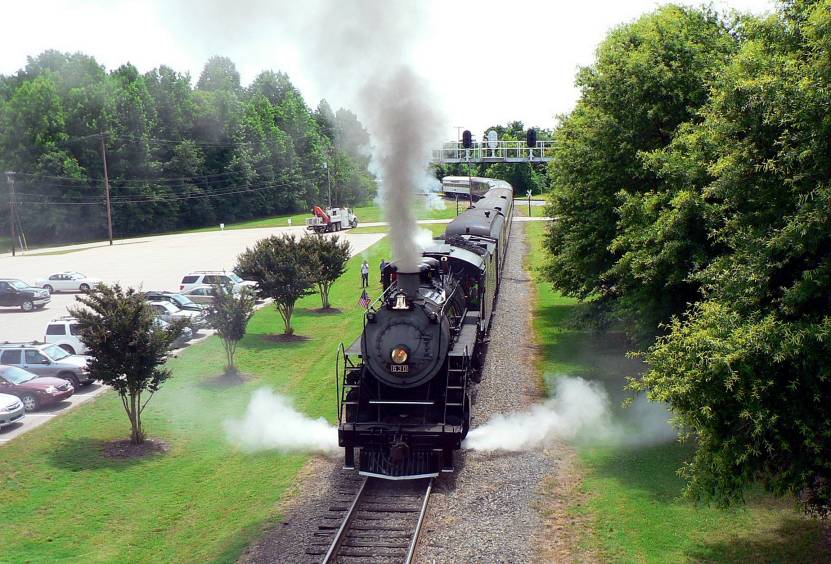 The #630 looks really alive in this image that captures a good amount of exhaust plume and steam from her cylinders. She is backing from the NCTM to the connection with the NS. Dan Robie 2012 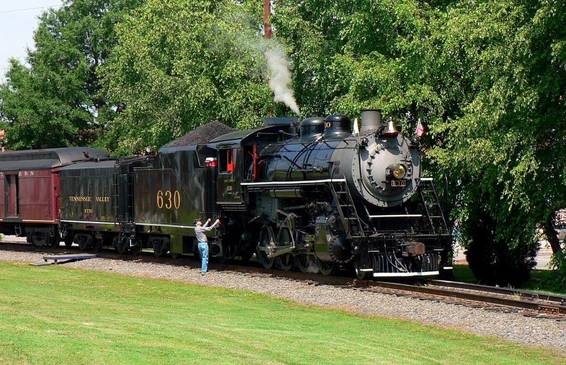 Another view at the NCTM prior to the second departure for Barber later that afternoon on June 9. A NCTM volunteer is talking to the engineer before getting underway. The magical allure of the steam locomotive is just as powerful in the 21st century as it was in the past.

The #630 is at the Council Street crossing as pulls forward to clear the wye connection with the "S" Line (Asheville). Once clear it will return to the NCTM at Spencer. An old time feel here in the heart of the old railroad district of Salisbury. Dan Robie 2012 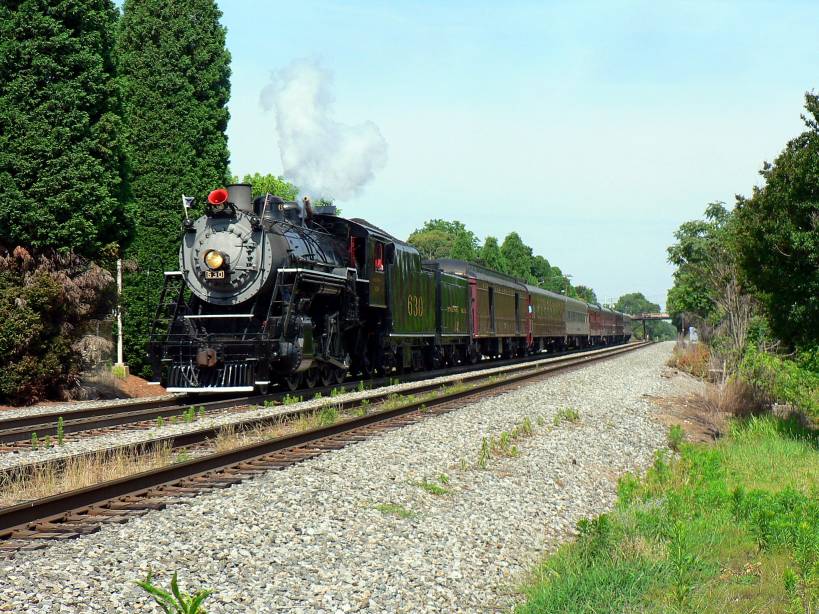 The return from the first trip out to Barber. The #630 and train run the NS "S" line east on the approach to the Church Street signal in Salisbury and the connection to the north-south (Washington-Atlanta) mainline. Dan Robie 2012 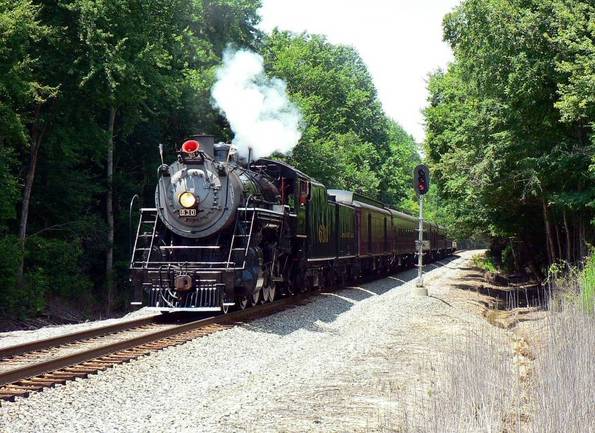 One negative about photographing trains between Salisbury and Barber is limited trackside access from public property. Otherwise, it is a photogenic route and especially so as one moves west towards Asheville.

On the return from the second trip to Barber on June 9, the train is running at a good clip by the 6.1 signal on the "S" line between Salisbury and Barber. White steam bellows out from the whistle as the #630 approaches a grade crossing. So nice to see steam on the main line again.   Dan Robie 2012 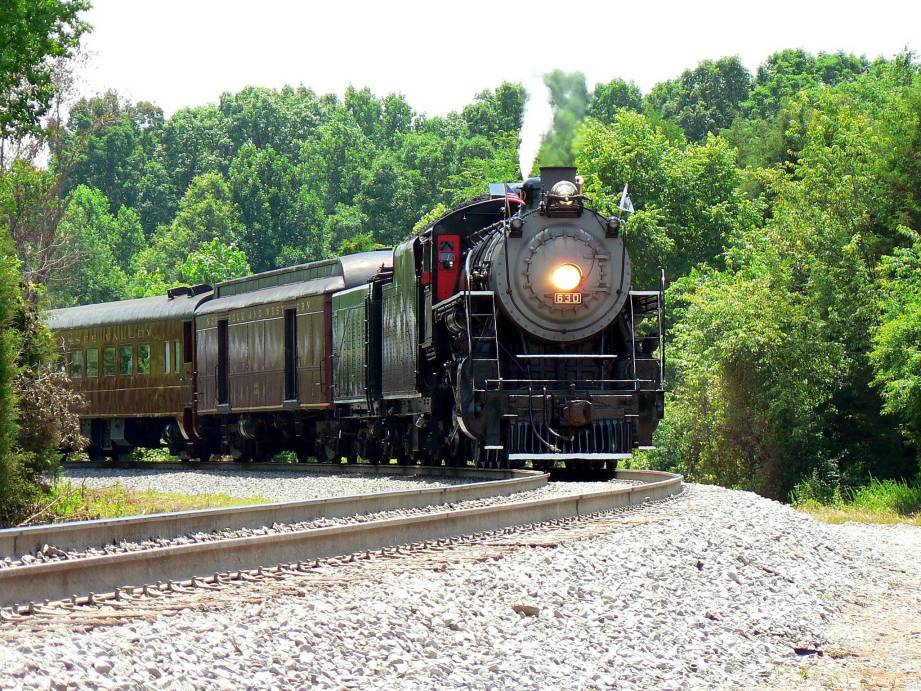 The 2-8-0 has slowed considerably since she diverged from the "S" line onto the steep connecting track to the NS Charlotte-Winston-Salem line. The primary reason for selecting a Spencer-Barber trip was that the train could be wyed at Barber for the return. Dan Robie 2012

Barber, or Barber Junction as it is commonly referred as, is a unique location in that it still has nostalgic feel. The surroundings are rural and is often the case, very few changes occur over the course of time. Situated at the junction of the NS "S line (Salisbury-Asheville) and the NS "L" and "O" lines (Charlotte-Winston-Salem), it also hosts a small yard and is the home base for locals operating to Mooresville and Mocksville. A brick depot still remains at the junction as well. Because of its unique track layout and relative easy access, this location has long been a favorite spot for train watchers and photographers alike. 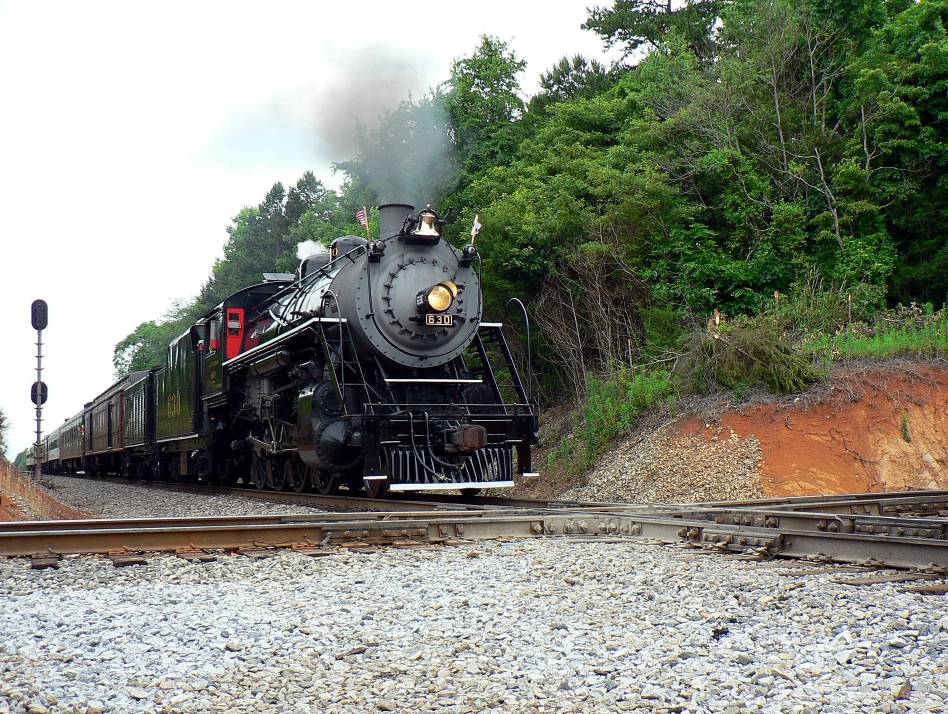 The train is now turned on the "S" line and is running east towards Salisbury as it prepares to hit the diamond at Barber.  A large turnout followed the train from Salisbury and prepared to chase it on the return. Dan Robie 2012

A couple of weeks after the Spencer-Barber excursions, I ventured to Thomasville to take a photo of the train on a Spencer-Winston Salem run. The notable change with these excursions was the addition of diesel road power to assist the #630 since this was a longer trip. The train did not return to Spencer; hence, it was a one way ticket with the riders bussed home for the return. 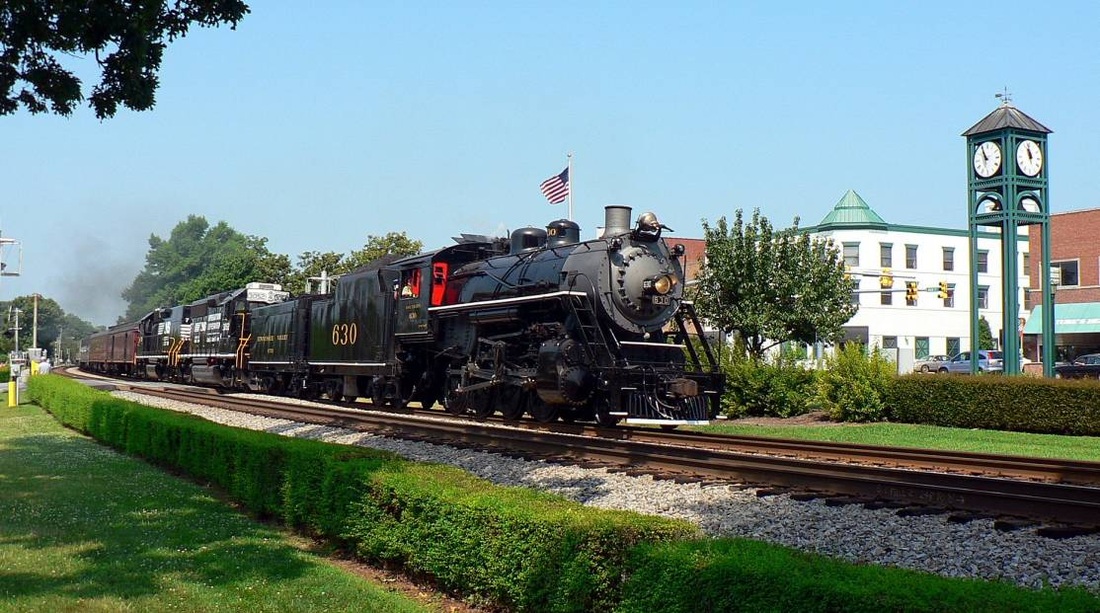 June 23 was a glorious day in Thomasville as folks young and old gathered to watch a steam locomotive pass through for the first time in almost twenty years. The #630 has help on this one but she is still proudly leading the way!  Dan Robie 2012

The #630 revisited Spencer on the weekend of April 12-13, 2013. Three separate excursions were operated once again between the NCTM and Barber Junction on April 12. On April 13, the locomotive was the star attraction for the North Carolina Transportation Museum itself for excursions on its property for the day. 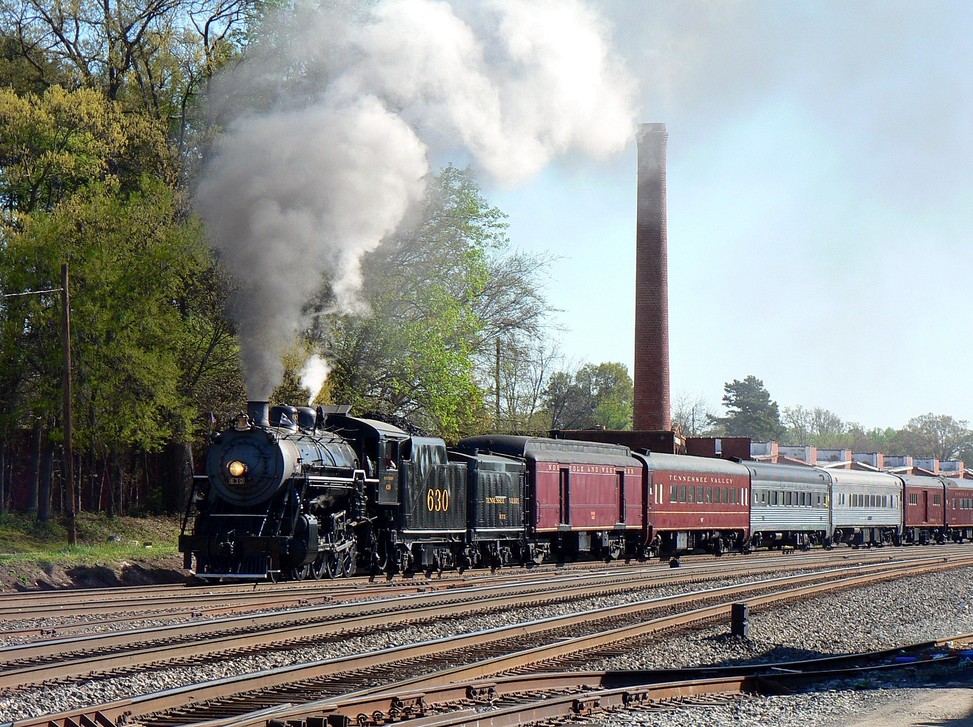 Running through Salisbury as the train has already diverged onto the "S" Line for the run to Barber. Fans and photographers alike lined the railroad at virtually every accessible location for these runs. Dan Robie 2013
One dramatic change about the #630 in 2013 is heavier plume from the exhaust which added to the photographic element. Compare this and the selected images below to the ones from 2012 above and there is definitely a difference. 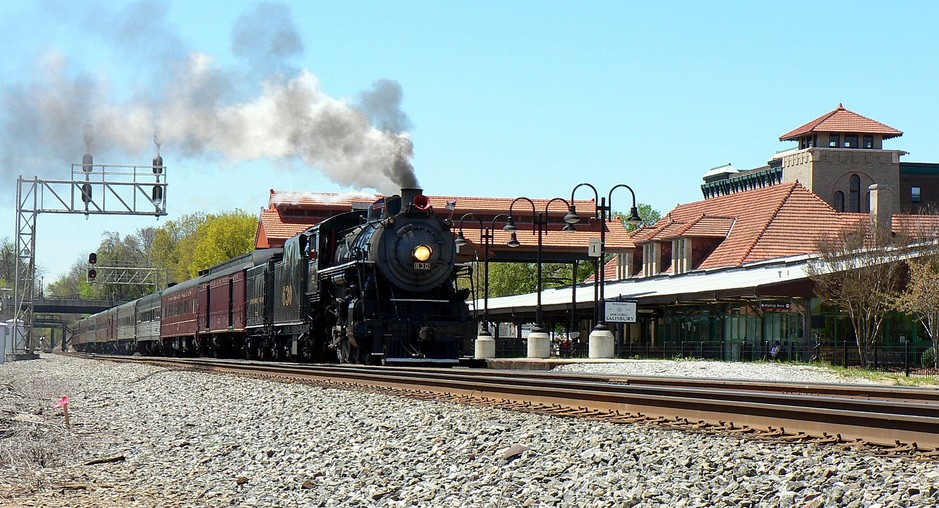 Having backed past the south connection to the wye for the "S"Line, the #630 and train now move forward past the Salisbury station. Dan Robie 2013
As in 2012, this was a wonderful event to witness. The weather was absolutely perfect and without question it was a major contributor to the volume of trackside turnout this year. My goal this year was to photograph it at different locations than in 2012. 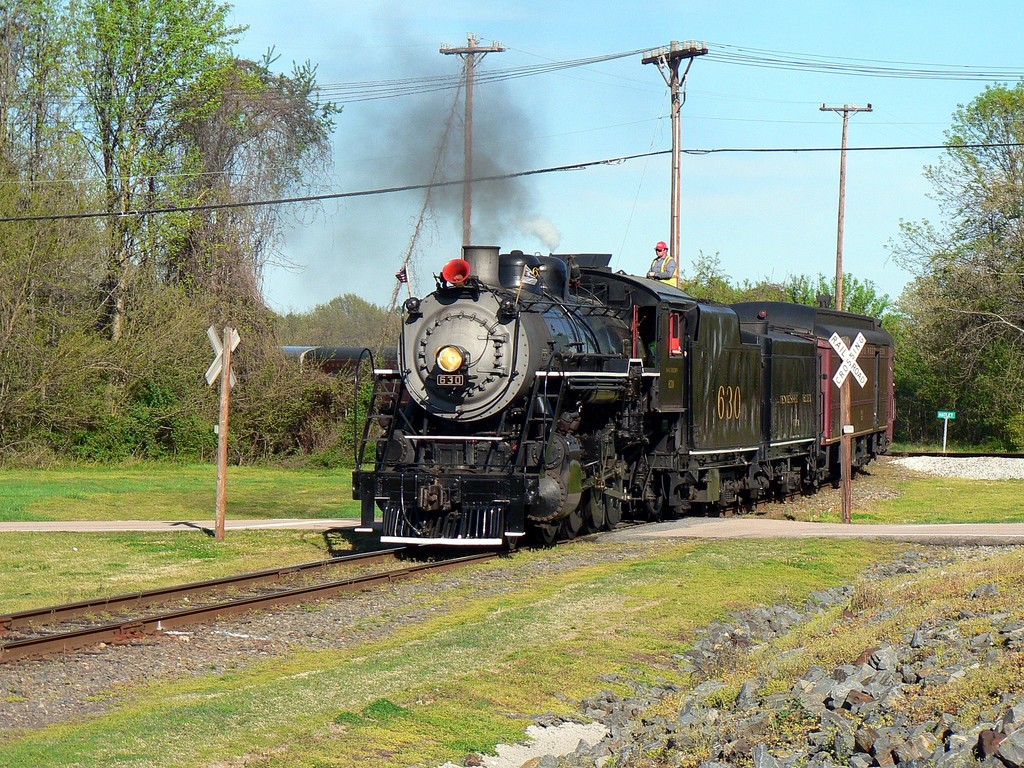 Arriving at the NCTM from the final run of the day. The grade crossing is the main entrance into the museum. Dan Robie 2013
The country as it was when dominated by the steam locomotive was a fascinating time. Some will argue that it was a more environmentally compromised period and it is true that the railroad added its share of pollution. But these living machines literally built the industrialized America of the past and all those who operated and serviced these marvels were no less than a hearty lot. Restored beauties such as the #630 provide a tangible connection to this bygone era that several generations now do not know. 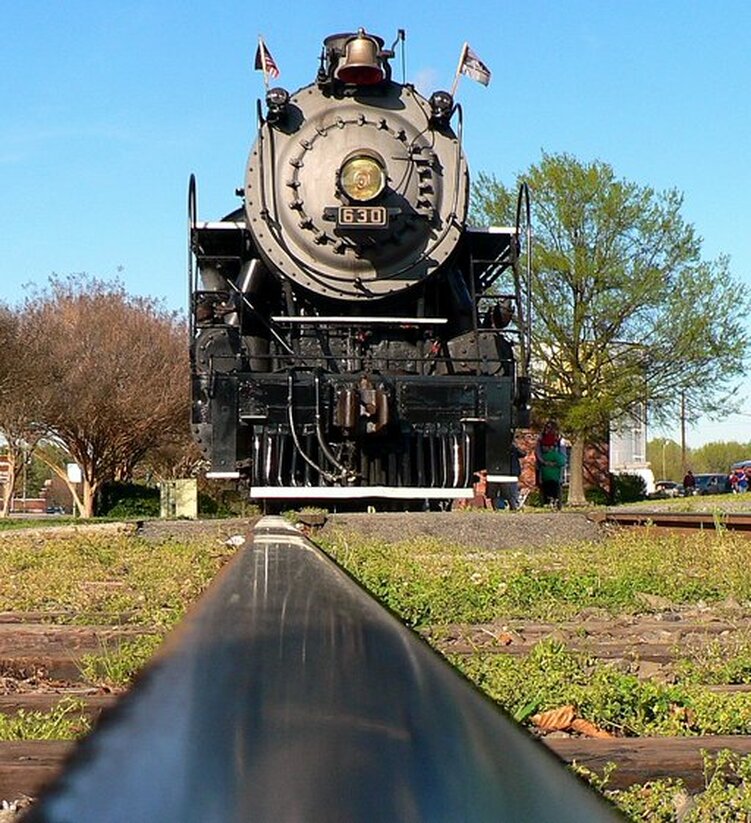 A railhead view of the #630 at rest. She has been tied down with the train and her fire has been dropped. Tomorrow she will power the NCTM excursions on the museum property. Dan Robie 2013

Watching the #630 has left me with conflicting emotions. Here I am thrilled to be with my son Matt who is as avid about trains as I am and had yearned to see steam on a Class I mainline. Yet at the same time there were also tears as I reminisced about the C&O 614 and Nickel Plate #765 from years ago in West Virginia and how special it was for my dad to be standing beside me for them. A passing of the torch so to speak.